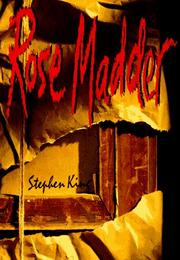 King's 30th novel (Insomnia, 1994, etc.) gets off to a careful, grand start but quickly turns to a half-pound of story to five pounds of stuffing, or tedium triumphant. Still, this one may find King hitting the ball not just out of the park but around the globe. After 14 years of marriage to biter and wife-beater Detective Norman Daniels, Rose McLendon Daniels steals her husband's ATM card and runs off to another city. But Daniels's job is finding people, and as a biter he's even more bent than the wife-beating police-chief in Nelson DeMille's Spencerville; like his, Daniels's verbal rage allows no range to monolithic villainy. In a far-away hockshop, Rose trades her engagement ring for a mystery-ridden painting of a woman in a crimson (rose-madder) chiton with her back to the viewer (one thinks of Wyeth's Christina's World), which she hangs in a new apartment found for her by the Daughters and Sisters, a battered women's group. She also falls for softspoken Bill Steiner, the shop's young pawn-dealer, who courts her on his motorcycle and opens her to new worlds. Rose also finds new worlds as a Liz Taylor-sound-alike reader for audiobooks, and in her painting, which magically allows her to enter its dense detail. We follow Daniels's course as he unearths clue after clue and bites several straw figures to death in warm-ups for his first big bite out of Rose. When it comes, Rose discovers that an armlet worn by the figure of Rose Madder in the painting has given her left arm the strength of Wonder Woman. Even so, she and Bill race through moonlight into the painting, while Daniels, as enraged as a bull, chases after them.... Magic against wife-beating — sounds attractive? But as events thin out, what's left are pages and pages of dull, falsely pitched lowbrow dialogue, abuse, biting, symbolic fantasy, and feminist tub-thumping. Overwhelmingly uninventive — and if Liz Taylor does the audiobook, believe in miracles.