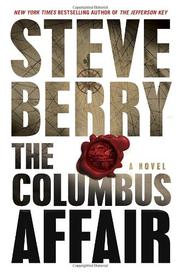 Was Columbus Jewish? The answer may matter a lot more than you think.

Five hundred years after his fourth and last voyage to the New World, the Admiral of the Ocean Sea is back in the news again, and wealthy Austrian Jew Zachariah Simon and Jamaican crime lord Béne Rowe have taken notice. Convinced that Columbus, of whose life nearly nothing is known for certain, took to his grave the secret location of a gold mine in Jamaica, they team up, at least briefly, to put pressure on disgraced ex-journalist Tom Sagan to tell them what he knows. And since Tom, who’s fallen into depression since a questionable Mideast news story forced him to return his Pulitzer and condemned him to life as a ghostwriter, is about to kill himself, he’s going to need special motivation. This Simon supplies in the form of a live video of Sagan’s estranged daughter, Alle Becket, groped by mercenaries as she writhes bound and gagged on a bed. Tom’s not to know that Alle, still seething with hatred for the father who neglected her, has helped stage her videotaped victimization. Also in the hunt are Brian Jamison, who says he’s an American intelligence officer from something called the Magellan Billet; Frank Clarke, of the Charles Town Council of Elders; and the 102-year-old Rabbi Berlinger, of Prague’s Old-New Synagogue, who’s convinced that the apostate Tom is the latest Levite. This being a Berry production (The Emperor’s Tomb, 2010, etc.), every alliance is of course fragile, and the bonds among even the heartiest teammates are up for grabs. So is the ultimate goal, for the author gradually reveals that Columbus’ lost gold mine is only chicken feed compared to the real bonanza at stake.

Less The Da Vinci Code than American Treasure. Think of Nicolas Cage tearing up the scenery as Tom Sagan to the background beat of popping corn, and you’re halfway there.