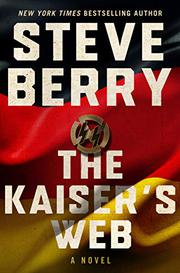 The rise of a neo-fascist with deep roots in the Third Reich pulls not-exactly-retired Justice Department agent Cotton Malone back for a 16th round of international intrigue.

A specter is haunting Europe. No, not the coronavirus but Theodor Pohl, an insurgent German nationalist who’s set his sights first on toppling long-serving chancellor Marie Eisenhuth, then on making the Fatherland great again—really, really great. Barely have Malone and his lover and comrade in arms Cassiopeia Vitt dusted themselves off from their leap from their mortally wounded plane in Poland on a single parachute than ex-President Danny Daniels is packing them off to Chile to investigate rumors that Adolf Hitler, Eva Braun, and Martin Bormann didn’t all die in that bunker in 1945; at least one of them escaped to South America with billions in Nazi gold. The trip to Chile produces some eye-popping revelations and whittles down the cast, but instead of settling matters for good, it propels Malone and Vitt to South Africa for further investigations among people determined to be left alone until their time has come. Meanwhile, back in Germany, the chancellor realizes that she’s being undermined by not only Pohl and his ruthless acolyte, Josef Engle, but her xenophobic husband, Kurt Eisenhuth, whose past is even more checkered than she knows. Cannily mixing historical research with florid inventions that fill in gaps and sometimes fly in the face of the available evidence, Berry presents an ominously up-to-date world whose frenzied nationalism is a direct descendant of the Thousand-Year Reich.

Hitler may not live, but Heil Hitler is alive and all too well.