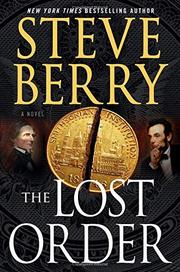 Berry’s (The 14th Colony, 2016, etc.) latest brews another thriller from the formula that’s put him on the bestseller lists: modern bad guys discover a historic conspiracy that can make them rich and/or give them power to overturn the American republic.

Again it’s the Magellan Billet’s Cotton Malone, Navy pilot/spy/Copenhagen bookstore owner, into the fray, this time to find millions in gold secreted by the defeated Confederacy’s Knights of the Golden Circle. A map to its location is inscribed on a combination of five stones scattered around the country. It’s U.S. Supreme Court Chief Justice Warren Weston who's sent Malone to recover the stones, with fellow agent (and Malone love interest) Cassiopeia Vitt earning a supporting role. Magellan Billet chief supporter President Danny Daniels has just left office, leaving Magellan chief Stephanie Nelle in limbo. At first, Stephanie’s unaware of Malone’s mission, but she’s soon to be mired in related issues after Daniels discovers another plot when his best friend, Sen. Alex Sherwood of Tennessee, dies. Because of suspicious behavior on the part of Sherwood’s widow, Diane, Daniels believes there's a plot to twist the Constitution’s Article I to give near-dictatorial powers to the Speaker of the House, Lucius Vance, "a self-confident, pompous ass." Formerly a bit player, Daniels' larger role creates interest, especially as Berry digs deeper into his character. Berry also gives cameos to Jesse James and Confederate VP Alexander Stephens while offering notes on James Smithson’s crypt and the history of the Smithsonian and setting up a former Smithsonian curator as a bad guy behind the mask of a stunning disguise. With the link between the gold and the political power grab ephemeral, this overly long novel tries too hard.

Readers looking to sample the historical-conspiracies genre should begin with one of Berry’s earlier efforts.