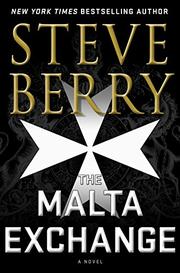 Religion and murder meet in Malta and Rome in this 14th entry in the author’s Cotton Malone series (The Bishop’s Pawn, 2018, etc.).

The pope has died, and His Eminence Kastor Cardinal Gallo schemes to get the job. Unfortunately, he is “radioactive” in the church, even “proclaimed a threat to all the faithful.” Oh, and he only fakes his religious belief. All he wants is power, and he will kill for it. His identical twin brother, Pollux, is a Knight of Malta but not a priest and certainly not his brother’s keeper. Meanwhile, series hero Cotton Malone is on a special freelance assignment from Britain’s MI6, looking for rumored secret correspondence between Churchill and Mussolini. And former Army Ranger Luke Daniels trails Kastor, who is from Malta, where much of the story takes place. Cotton finds a mysterious ring engraved with a Maltese cross and a five-word palindrome that’s spelled out a tad too often. Perhaps a secret lies in the engraved words. He also uncovers documents hidden by Mussolini and looks for what’s hidden in an obelisk in Rome. The intrigue is intense as Kastor and a few goons will stoop to murder to abet his rise to the most powerful post in the Catholic Church. Thriller fans will have their violence fix, but the real fun is in learning about the inner workings of the church, its history dating all the way back to Constantine, and the troubled past of Malta. Cynicism about Christianity abounds; why else would Simon Wiesenthal have said that the Vatican has the best spy service in the world? Popes Pius XI and XII never stood up to the fascists, and perhaps heaven, hell, and the Holy Trinity were invented in the third century merely to differentiate Christianity from Judaism. Cotton is highly capable—“Failure was not his style,” meaning he fits in well among the can-do American heroes in the genre. But Kastor and Pollux are the conniving hypocrites who really pop off the pages.

This one will appeal to Dan Brown fans and anyone else in the mood for a page-turning yarn.