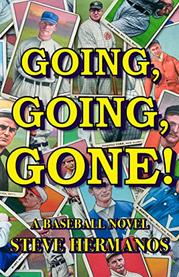 Baseball players travel back in time to the wild major leagues of the early 20th century in this fantasy.

Hermanos’ tale follows three modern-day San Francisco Giants teammates—prima-donna star André Velez, who keeps hammering homers with the help of illicit steroids; struggling rookie second baseman Johnny Blent; and grizzled manager Bucky Martin. They get catapulted back to the year 1906 during an earthquake and wash up with the New York Giants. The trio takes in a barely recognizable sport where bats weigh 50 ounces; unkempt playing fields are studded with rocks and potholes; spitballs are legal; drunken fans routinely attack players on the diamond; and contracts pay $800 a year. Blent and Velez painfully adjust—the half Black Velez pretends to be a Native American to get into the segregated majors—to become top players. Martin, meanwhile, gets hired as manager thanks to his 21st-century sabermetrics; he gradually tames a team that likes liquor, vandalism, and gunplay better than practicing and leads the Giants from the cellar to the World Series. Unfortunately, the trio’s new timeline is warped by the presence of New Glory, a Caribbean slave empire run by Confederates who escaped to Cuba after the Civil War and are forcing Albert Einstein to build them an atom bomb. When New Glory’s baseball league challenges the Giants to a “Solar Series,” the fate of the world hangs in the balance. Hermanos’ novel mixes steampunk themes into a vivid baseball yarn that’s full of colorful period details and piquant sketches of historical figures, from wily mound genius Christy Mathewson to a blustery Theodore Roosevelt and a mad Nikola Tesla. The author’s portrait of old-time baseball steeps readers in intricate strategizing, punchy dialogue—“Phillippe, you fucking infant! Suck your thumb! Shake your rattle!” goes a typical on-field razzing—and play-by-play that’s riveting and even lyrical. (“Head down, legs churning, he senses the white light of God is emanating from second base as he races for it, the ball crossing his field of vision as he slides, the ball ticking off the second baseman’s glove, Blent popping up and zipping for third, McGraw’s fist of a face staring at the ball coming in, ‘Down! Down! Down!’ ”) Readers will stick with this riotous page-turner to the last out.