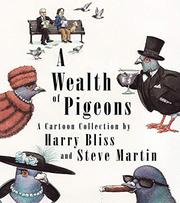 A WEALTH OF PIGEONS

The veteran actor, comedian, and banjo player teams up with the acclaimed illustrator to create a unique book of cartoons that communicates their personalities.

Martin, also a prolific author, has always been intrigued by the cartoons strewn throughout the pages of the New Yorker. So when he was presented with the opportunity to work with Bliss, who has been a staff cartoonist at the magazine since 1997, he seized the moment. “The idea of a one-panel image with or without a caption mystified me,” he writes. “I felt like, yeah, sometimes I’m funny, but there are these other weird freaks who are actually funny.” Once the duo agreed to work together, they established their creative process, which consisted of working forward and backward: “Forwards was me conceiving of several cartoon images and captions, and Harry would select his favorites; backwards was Harry sending me sketched or fully drawn cartoons for dialogue or banners.” Sometimes, he writes, “the perfect joke occurs two seconds before deadline.” There are several cartoons depicting this method, including a humorous multipanel piece highlighting their first meeting called “They Meet,” in which Martin thinks to himself, “He’ll never be able to translate my delicate and finely honed droll notions.” In the next panel, Bliss thinks, “I’m sure he won’t understand that the comic art form is way more subtle than his blunt-force humor.” The team collaborated for a year and created 150 cartoons featuring an array of topics, “from dogs and cats to outer space and art museums.” A witty creation of a bovine family sitting down to a gourmet meal and one of Dumbo getting his comeuppance highlight the duo’s comedic talent. What also makes this project successful is the team’s keen understanding of human behavior as viewed through their unconventional comedic minds.

A virtuoso performance and an ode to an undervalued medium created by two talented artists.