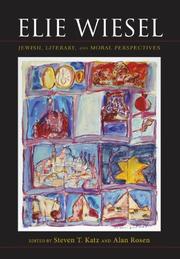 The 1986 winner of the Nobel Peace Prize, memoirist and novelist Wiesel (Open Heart, 2012, etc.) has been a profound thinker and prolific writer whose work reflects his experiences in the Nazi concentration camps. This collection encompasses “a broader range of critical perception,” showing how his Hasidic faith, his biblical interpretations and his meditations on the silence and solitude of God illuminate the central focus of his work on the Holocaust—on which the author has written about so often while maintaining the impossibility of writing about it. Among the essays, titles such as “Alone with God: Wiesel’s Writings on the Bible,” “Wiesel in the Context of Neo-Hasidism” and “Wiesel’s Contribution to a Christian Understanding of Judaism” reflect the variety of perspectives through which scholars approach his work, while the literary criticism of “The Trauma of History in The Gates of the Forest” attests to the multifaceted genius of his fiction. Since Wiesel has already been so widely written about and justly celebrated, this attempt to fill some of the cracks and broaden the discussion requires that readers already have a wide and deep familiarity with the author’s work. “[Wiesel] has been able to place the questions before the public in his own narrative form, that of the teacher,” writes Everett Fox (Judaic and Biblical Studies/Clark Univ.). “The model here is not the lecturer, nor the resident intellectual, nor the pedant. Rather, Wiesel brings his audience along with the flair of a storyteller, but a storyteller who knows how to go into the audience to pose the questions that are on, or should be on, everyone’s mind.”

Criticism that enhances the appreciation of readers well-versed in the author’s work.