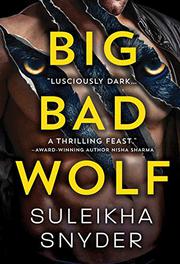 From the Third Shift series, volume 1

A jaded New York werewolf who's been branded a criminal has little hope for his future until he crosses swords with his take-no-prisoners lawyer.

While there's little doubt that ex-Marine Joe Peluso has killed six Russian mobsters, psychologist and lawyer Neha Ahluwalia is determined to look for nuance that will help mount a defense. However, Joe, who has killed the bear-shifters to avenge the death of his foster brother, refuses to disclose any details. Joe's abrasive reticence aside, Neha is fighting battles on several other fronts in a country rocked into political chaos by the revelation that supernatural beings walk among ordinary citizens: She must beware of the nefarious links between New York’s Russian underworld and its government, duck the surveillance drones forever circling the city, and contend with social prejudices that deem her wolf-shifter client a monster. Even as Joe and Neha are trying in vain to fight an uncomfortably strong sexual attraction, they are thrust into a battle for survival when Joe is attacked in jail. Cornered by dangerous predators, they turn to the Third Shift, a powerful security organization trying to restore justice in a deeply polarized society. In the inaugural installment of the Third Shift series, Snyder builds a compelling universe, evocatively describing everyday life in a world where social structures are fractured by prejudice and fear. In the process, she alludes to several contemporary realities, including the difficulties associated with measuring varying experiences of marginalization and oppression against each other. While Joe and Neha are engaging personalities, the progress of their relationship feels abrupt and lacks emotional heft. But the cast of secondary characters is so refreshingly diverse and engaging that it's easy to overlook the protagonists’ penchant for going around in circles.

A familiar romance set in an extraordinarily gripping world.