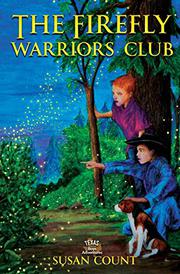 A Texas boy and his cousin face unexpected challenges when trying to protect fireflies in this middle-grade novel.

In Book 1 of the new Texas Boys Adventures series by Count, 12-year-old Davy, a budding entomologist, arrives for a summer visit at his grandfather’s farm, “the best insect observation site he knew.” At first, it seems that annoying younger cousin Anderson will spoil Davy’s plans, until the two discover a colony of endangered fireflies, which communicate by flashing in code, in the forest on the edge of Grandpa’s farm. Davy learns that a neighboring farmer’s pasture-clearing is decimating the fireflies’ habitat. He and Anderson decide to become “Firefly Warriors,” seeking ways to help the glowing insects. The author’s touch of the supernatural in the plot is deftly balanced with the boys’ lively, reality-based adventures and by strong messaging about insects and their vital place in the world’s ecology, under threat from pesticides and loss of habitat. “If the insects die, then everything that needs them for food dies too,” Davy says. (Davy’s knowledge about nature isn’t restricted to fireflies. His opportunities for sharing facts about insects and other wildlife arise naturally in conversation—and during a scary encounter with a rat snake.) Davy learns of a possible solution to the fireflies’ plight that would allow farmers to turn part of their land over to wildlife preservation, but before he can promote this idea, a raging fire breaks out, threatening farms and forest and sending the fireflies’ chances for survival plummeting. Davy and Anderson will use their strength and ingenuity to corral frightened cattle and help firefighters’ efforts to control the blaze, but will they be able to help the fireflies? Meanwhile, the successful, warm heart of the novel is found in the changing dynamic between Davy and Anderson and in subtle character-building messages about friendship, empathy, and courage in the face of fear. A handful of cleanly rendered, black-and-white line drawings illustrate the action; the back of the book includes numerous firefly facts.

Appealing young male protagonists, a touch of magic, respect for nature and human connection, and plenty of action.