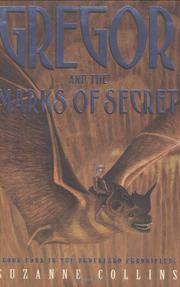 GREGOR AND THE MARKS OF SECRET

From the Underland Chronicles series, volume 4

In this, the penultimate volume in “The Underland Chronicles,” Collins begins to gather herself for the grand finale. Gregor has been taking echolocation lessons with Ripred, the charismatic and violent outlaw rat, and after one session he introduces Gregor to Bane, the white-rat pup Gregor spared in defiance of prophecy (Gregor and the Prophecy of Bane, 2004). Bane is now some eight feet tall and still growing, and thoroughly, dangerously mad. Shortly after this introduction, both Ripred and Bane go missing, and Queen Luxa discovers that the mice who succored her in the jungle (Gregor and the Curse of the Warmbloods, 2005) have also disappeared, leaving only one enigmatic Mark of Secret. Flying bat-back into the depths of the Underland go Gregor and Luxa, Luxa’s cousins Howard and Hazard, Gregor’s little sister Boots and the faithful cockroach Temp. A customarily eventful trip through Hades Hall to the Firelands leads the band to both the mice and Bane, who has his own Final Solution in mind for the entire mouse race. The cliffhanger ending will leave readers gasping as Gregor goes chasing another prophecy, the direst yet. (Fiction. 9-14)