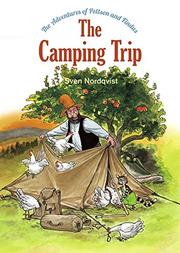 From the Adventures of Pettson and Findus series

Perils and perturbations await two friends hoping for a peaceful camping experience in the mountains.

When Pettson, a bearded, white human, and his beanie-wearing cat, Findus, discover an old, rolled-up tent in the attic, they are inspired to take a hike in the mountains. Unfortunately their trip is cut short by 10 of Pettson’s overly enthusiastic hens, who want to tag along. They decide just to pitch the tent in the yard. After that nothing is predictable. Fishing in the nearby lake reveals a massive pike, Findus coerces Pettson into sleeping in the tent with him, and after that, Pettson tells a whopper of a tall tale to his neighbor about why they’re camping at all. The story was originally published in Swedish in 1992 and in the United States in 1993 as Festus and Mercury Go Camping, and it’s little wonder that Pettson (a parental stand-in) and Findus (a child) have a cult following. There’s more text to each scene than most modern picture books, but Nordqvist’s writing keeps everything moving at a smart clip. Tiny details and creatures are often hidden in the backgrounds of the book’s scenes, and most (like the mailbox in Pettson’s bedroom that’s stuffed full of dirty socks) are charming. One exception might be a teepee with a feathered headdress–wearing rodent family peeking at our heroes’ foibles.

This stand-alone title in a series is sure to win hearts and minds, even as its characters come near to losing the latter.