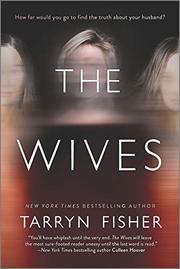 Marriage is hard enough without having to compete with two other wives in Fisher’s (I Can Be a Better You, 2018, etc.) psychological thriller.

Businessman Seth is married to three women. Well, he’s actually only legally married to the narrator, a Seattle nurse he only sees on Thursdays. She calls the other two Monday and Tuesday since she doesn’t know their names. They’re polygamists, but Seth has no interest in a sister wife situation, and he’s done a good job so far in keeping the three lives he leads, and the women he leads them with, separate. Until now. In fact, his Thursday wife is getting downright restless. She’s tired of living only for Thursdays and is still haunted by the loss of a child. Though she truly believes she loves Seth, she frequently wonders how she lost herself so completely in such an unsatisfying and unbalanced marriage. When she finds a slip of paper with the name Hannah, who she believes is another of Seth’s wives (the pregnant one, in fact), a whole new world of snooping opens up to her. She even goes so far as to set up a meeting with Hannah—without revealing her true identity, of course—and is alarmed to see that Hannah is hiding some bruises that look an awful lot like finger marks. What she subsequently discovers leads her down a rabbit hole of startling revelations, and the narrative takes a sharp left turn that would be shocking if most genre readers hadn’t already seen similar twists before. It’s all a bit over the top, but Fisher is a slick writer who keeps a tight rein on her lightning-fast plot, and the lengths that her feisty narrator goes to in order to reclaim her life make for salaciously satisfying reading.

Derivative and shamelessly manipulative but still a lot of fun. Fisher is a writer to watch.