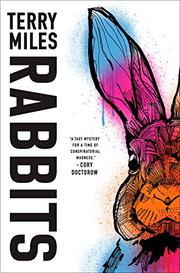 The creator of the absorbing podcast Rabbits expands its mythology about an ancient and potentially deadly game.

Debut novelist Miles is known for creating hit podcasts, and while this peculiar augmentation doesn’t quite stick the landing, its premise is spellbinding. Its namesake podcast is a missing persons mystery, but this sidequel digs far deeper into the mysteries surrounding the clandestine alternative-reality game at its heart. The narrator identifies himself only as K, and he’s fascinated by any threads of information about the unnamed game, known to players colloquially as “Rabbits.” Egged on by a video-arcade owner named the Magician, K, his girlfriend, Chloe, and pal Baron search out more information about the game as things get more dangerous for all of them. There’s not much to go on: The first recorded modern instance of the game emerged in 1959; a fractured recording lays out a few more clues, and readers learn more from interstitial notes by Hazel, the winner of the eighth iteration. Things start getting serious when K is approached in the arcade by the alleged winner of the sixth game, Alan Scarpio, “a gazillionaire playboy who hangs out with Johnny Depp,” who nonchalantly says, “Something is wrong with Rabbits, and I need you to help me fix it.” It’s believed that the game’s 10th iteration has ended, and a new round seems to be beginning when players solve a series of obscure riddles, followed by a cryptic pronunciation: “The door is open.” While not as pop-culture inundated as Ready Player One, the book nods to eccentric influences like the urban legend Polybius, about a mind-altering arcade game; the novels Invisible Cities by Italo Calvino and House of Leaves by Mark Z. Danielewski; and, most tellingly, the cult movie Donnie Darko: “The Venn diagram of people interested in Rabbits and in Richard Kelly’s sci-fi thriller from 2001 is essentially just a circle.”