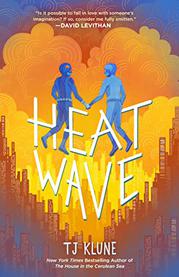 From the Extraordinaries series, volume 3

The last installment of the Extraordinaries trilogy is everything a devoted fan could want: dramatic, action-packed, sentimental, and steamy.

It’s the summer before Nicholas Bell’s senior year of high school, and though he really should be working on his college admissions essays, he’s got other priorities, like making out with his incredibly handsome boyfriend, Seth Gray. Oh, and also training to become one of the vigilante superheroes called Extraordinaries. Thankfully Nick’s got an amazing support group in his friends and their families, including Seth, aka the fire-powered Extraordinary Pyro Storm; the self-proclaimed, pun-ready Dad Squad; Miss Conduct, another Extraordinary who happens to be a drag queen—and his mother, who’s always been there for him. Nick has taken on his mother’s mantle of Guardian, honing his still unsteady telekinetic powers. This book is jammed with plot twists, making it a real page-turner. Klune also doesn’t shy away from incorporating real-life events into his story, such as discussions related to racial bias in policing and the extremism of a wealthy businessman who is running for public office. Nick and Seth have several open, practical conversations about the next physical steps in their relationship, modeling healthy communication and consent in a queer relationship. The lead protagonists are White; the supporting cast includes racial diversity.