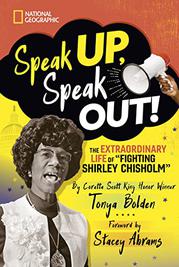 SPEAK UP, SPEAK OUT

Born in the U.S. to Bajan immigrants in 1924, “Fighting Shirley Chisholm” was raised and educated in both Barbados and the United States. As a teacher and administrator, she labored to improve the welfare of children in New York and championed legislation that supported low-income families and disadvantaged groups all over the country. Dedicated and unrelenting in her passion to serve “the workaday folk who make up most of the nation,” Chisholm worked her way up to becoming a congresswoman. The book describes how she was forced to battle racism and sexism en route to becoming the first Black person to seek a major party’s nomination for president of the United States. Readers will learn how Chisholm navigated an educational and political system bent on keeping women like her disempowered. The strength of Bolden’s skill as a researcher is evident; chapter by chapter, she provides succinct but critical context around the motivations and movements of Chisholm’s political career. A foreword by Stacey Abrams helps establish that Chisholm’s legacy is one of political innovation as someone who forged a path for others to follow. This informative book has an engaging narrative structure. The use of repetition and inclusion of memorable pearls of wisdom attributed to Chisholm add a poetic tone.

An insightful and focused profile of a political trailblazer.