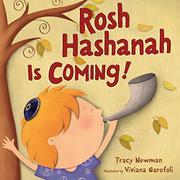 From the A Holiday Is Coming! series

Two young members of an extended family get ready for the Jewish New Year.

In single-page scenes, these white youngsters, one with short, blond hair topped with a yarmulke and the other sporting brunette pigtails, make traditional round challah bread, blow a shofar, prepare apples to dip in honey, and don brand-new clothes. The preparations culminate in a candlelit family meal and the children’s joyous greeting of the New Year at sundown with the exultation “Shana Tovah!” Newman’s simple, rhymed couplets describe each scene with economy and are punctuated with the repeated refrain, “Rosh Hashanah is coming.” Garofoli’s jewel-toned art, which looks as though she created it using a computer, is pleasingly animated and accessible.

A simple and joyous introduction to an important holiday.