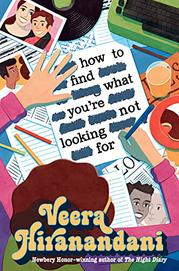 HOW TO FIND WHAT YOU'RE NOT LOOKING FOR

Their parents disapprove: To them, it’s bad enough that Leah wants to marry someone of a different race, even worse that he isn’t Jewish. After Leah elopes without even a letter to her sister, 11-year-old Ari is forced to reckon with a new understanding of her place within her family as the daughter who is now expected to take on the good-girl role. But that’s not her only problem. Her parents dreamed of a better life, yet they can’t afford to keep their beloved bakery running. Her mother sees Ari’s struggle with dysgraphia as laziness, and as the only Jewish kid in sixth grade, she faces antisemitism that goes unrecognized by her teachers. Her strained relationship with her parents and their beliefs rings heartbreakingly true alongside her struggle to find her own voice through poetry. As she and her best friend set out in secret to find Leah and repair her broken family, Ari must decide what she believes is right in an increasingly tumultuous world. Hiranandani captures with great nuance the details of Ari’s life. Sacrifices in the service of assimilation, the lies we tell the people we love most, and how we go about forgiving them are given specificity in Ari’s matter-of-fact and observant second-person present point of view.

A powerful blend of important themes and everyday triumphs and sorrows.