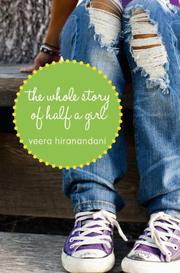 THE WHOLE STORY OF HALF A GIRL

Perched on the uncertain cusp of adulthood, each grapples with perplexing cultural identity issues, but in very different worlds. While Margaret’s grandparents pressure her to label herself as they wish, it’s Sonia’s peers who expect her to define herself racially and culturally. Having a nominally Hindu, Indian-immigrant dad and Jewish-American mom wasn’t a big deal until her father lost his job. Now Sonia must leave her comfortably small private school behind and—with Dad sinking into clinical depression and Mom taking on more work—chart her own course at Maplewood Middle School. Where does she fit? With the cheerleaders like pretty, blonde Kate or the bussed-in, city kids like Alisha, who’s writing a novel? Sonia’s the only cheerleader not invited to Peter Hanson’s birthday party. Is racism the cause? As in real life, her challenges don’t come neatly compartmentalized; Sonia will have to work out her mixed-heritage identity while contending with stressed-out parents, financial woes and vexing social uncertainties. Multifaceted characters, especially Sonia—astute, observant and original—provide depth.