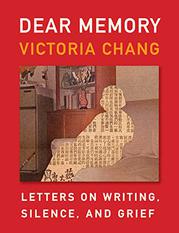 Letters on Writing, Silence, and Grief

In a series of letters and collages, an award-winning poet explores the wounds of her family history as well as her life as a writer and a mother.

"I wonder whether memory is different for immigrants, for people who leave so much behind,” writes Chang, whose parents were immigrants from Taiwan. “Memory isn’t something that blooms but something that bleeds internally, something to be stopped.” After the impressive formal innovations of her 2020 book, OBIT, which won multiple national awards, Chang continues to find new ways to plumb her experiences on the page. In addition to family members, she includes letters to Silence, to her Body, and to friends, fellow poets, and a teacher who started her on her way as a writer, which end up giving the book a second identity as an essay on craft. "What I learned from you was to forget the sun,” she writes, “that the moon burned more, to cling to things that didn’t seem to leave a trace, such as memory or silence or cruelty or beauty.” In “Dear Reader,” Chang explains that while she was at work on the letters, she found a box of photographs and interviews she conducted with her late mother. Using these and a variety of official documents, she presents a series of collages with hand-lettered text that create a backdrop of family history addressed both directly and indirectly by the letters. Depending on what one brings to this book, each reader may find their own moment of goosebumps or tears. One possibility are these lines on overcoming silence: "I still carry the brick around with me everywhere I go, but it is now outside of my throat. Sometimes I use it as a paper weight. Other times, it’s so light that it feels like I no longer have it at all."

This book is moving in a way that transcends story and message; it captures a pure sense of another person's heart.