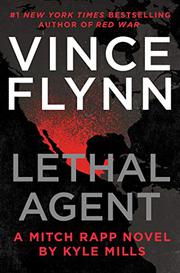 This latest offering from the late Flynn by way of Mills (Red War, 2018, etc.) shows that as long as bad guys run amok or crazy women run for president, America will need Mitch Rapp.

The terrorist Mullah Sayid Halabi barely survives an attack by Mitch Rapp, who is ex–CIA and a private contractor and the bane of all who hate America. Then Halabi concocts an attack he believes no one would ever anticipate: to weaponize anthrax, slip it through the Mexican border, and target politicians who support Middle East intervention. He will follow up with a new disease called YARS that will kill Westerners by the tens of millions and spark “a pandemic that would fundamentally change human existence for generations.” Why he doesn’t skip the anthrax and go straight to YARS is unclear. One person Halabi doesn’t want to hurt is the godless Sen. Christine Barnett, the probable successor to President Josh Alexander. Americans don’t care about God, health care, or the environment, she muses privately. They just want “to hurt the people they hate.” As president, she will “get the hell out of the Middle East” (leaving poor Rapp without much killing to do). Meanwhile, Halabi “relished the thought” of Barnett exploiting his attacks for political gain. She’s too useful to attack because he knows she’s a traitor to America. Their biggest obstacle is Rapp, the killing machine. “There were white hats and there were black hats,” Rapp muses. “When you killed all the people in the black hats, the job was done.” It’s too bad the contrasts are so stark, especially with liberal Barnett being an irredeemable nut job. Author Mills is a terrific storyteller, of that there is no doubt. But it’s so damn easy to read “white hats” as “MAGA hats,” and implying that half the country is unpatriotic gets old after a while.