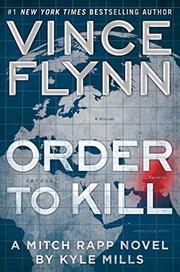 Series creator Flynn died in 2013, but Mitch Rapp lives on in this 15th chronicle (The Survivor, 2015, etc.) of the legendary CIA agent’s exploits.

When the CIA needs someone to keep Pakistani nukes out of terrorists’ hands, Rapp is clearly their go-to guy. He is “feared by even the most powerful men in the world.” This includes Russian President Maxim Vladimirovich Krupin, who calculates that exploding rogue nukes that can’t be traced back to him might serve his dastardly geopolitical aims. A half-dozen A-bombs could destroy enough Middle Eastern oil fields to divert huge revenues to Russia. So Krupin lines up the best man to foil Rapp: a talented killer named Grisha Azarov, who tells Krupin that Rapp has “no discernible weaknesses. His enemies…are all dead.” But then Azarov is no weenie himself, and the two adversaries make for a terrific matchup. Even the minor characters are colorful, especially Craig Bailer, an auto mechanic who has three Ph.D.s and arms covered with tattoos. Usually “the smartest guy in the room,” he has the best line in the book when he tells Rapp, “It’s a beautiful night and we have a cooler full of beer and a stolen A-bomb. It don’t get any better than that.” Rapp easily sidelines the American terrorist Eric Jesem and goes to extraordinary and creative lengths to impersonate him. That’s as entertaining as the book’s many action scenes, and it enhances his hero creds—but then he ruins it in one scene where he drills a slug through the heart of someone who simply doesn’t deserve it. But the inevitable confrontation between Rapp and Azarov is what thriller readers live for: tense and dramatic with a nice twist.

All in all, a crackling good yarn. Author Mills proves himself a worthy successor to carry on the series.