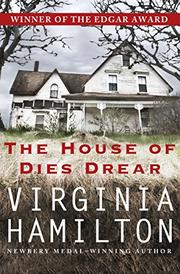 THE HOUSE OF DIES DREAR

Dies Drear? Ohio abolitionist, keeper of a key station on the Underground Railroad, bearer of a hypercharged name that is not even noted as odd. Which is odd: everything else has an elaborate explanation.

Unlike Zeely, Miss Hamilton's haunting first, this creates mystery only to reveal sleight-of-hand, creates a character who's larger than life only to reveal his double. Thirteen-year-old Thomas Small is fascinated, and afraid, of the huge, uncharted house his father, a specialist in Negro Civil War history, has purposefully rented. A strange pair of children, tiny Pesty and husky Mac Darrow, seem to tease him; old bearded Pluto, long-time caretaker and local legend, seems bent on scaring the Smalls away. But how can a lame old man run fast enough to catch Thomas from behind? what do the triangles affixed to their doors signify? who spread a sticky paste of foodstuffs over the kitchen? Pluto, accosted, disappears. . . into a cavern that was Dies Drear's treasure house of decorative art, his solace for the sequestered slaves. But Pluto is not, despite his nickname, the devil; neither is he alone; his actor-son has returned to help him stave off the greedy Darrows and the Smalls, if they should also be hostile to the house, the treasure, the tradition. Pluto as keeper of the flame would be more convincing without his, and his son's, histrionics, and without Pesty as a prodigy cherubim. There are some sharp observations of, and on, the Negro church historically and presently, and an aborted ideological debate regarding use of the Negro heritage.

Ideas abound, but when the focus shifts from Thomas' determination to take the measure of the house (literally and figuratively), the story becomes a charade.