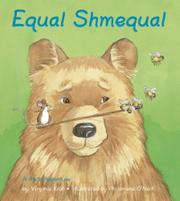 Forest animals learn the many meanings of “equal” through a game of tug-of-war. Mouse initiates the game with Bear, but then realizes that he forgot the important rule of equal teams. As more animals join in, they debate about how to divide evenly and test their ideas. Meat versus plant eaters doesn’t work, nor does furry versus not furry or even halves, since they are different sizes. Bear’s response to it all? “Equal Shmequal.” Gradually the animals learn that just because the numbers are equal does not mean the teams are equal. Mouse’s solution is to equalize the weights, using a seesaw to balance the teams. When Bear and Mouse pull against Turtle, Rabbit, Bobcat, Wolf and Deer, neither side moves—until Bear gets distracted. Moral: “What really matters is equal effort.” A final note tells readers “what it means to be equal” in math, art, law and team sports. Detailed watercolor illustrations clearly show readers what is equal and what is not, especially as the animals fail at their early efforts. A cute look at what can be a difficult concept. (Picture book. 4-7)