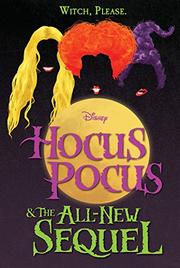 HOCUS POCUS AND THE ALL-NEW SEQUEL

In honor of its 25th anniversary, a Disney Halloween horror/comedy film gets a sequel to go with its original novelization.

Three Salem witches hanged in 1693 for stealing a child’s life force are revived in 1993 when 16-year-old new kid Max completes a spell by lighting a magical candle (which has to be kindled by a virgin to work). Max and dazzling, popular classmate Allison have to keep said witches at bay until dawn to save all of the local children from a similar fate. Fast-forward to 2018: Poppy, daughter of Max and Allison, inadvertently works a spell that sends her parents and an aunt to hell in exchange for the gleeful witches. With help from her best friend, Travis, and classmate Isabella, on whom she has a major crush, Poppy has only hours to keep the weird sisters from working more evil. The witches, each daffier than the last, supply most of the comedy as well as plenty of menace but end up back in the infernal regions. There’s also a talking cat, a talking dog, a gaggle of costumed heroines, and an oblique reference to a certain beloved Halloween movie. Traditional Disney wholesomeness is spiced, not soured, by occasional innuendo and a big twist in the sequel. Poppy and her family are white, while Travis and Isabella are both African-American.

A bit of envelope-pushing freshens up the formula.