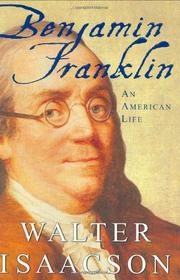 Nicely done life of “the most accomplished American of his age.”

Benjamin Franklin may have been among the leading revolutionary firebrands of his time, but, suggests Aspen Institute president Isaacson (Kissinger, 1992), he wouldn’t be at all out of place in an office park or perhaps Rotary Club meeting today. That doesn’t mean to say that Franklin was a proto-Republican, but instead a practical-minded businessman who found much virtue in striking compromises, building consensus, and networking—and who pinched pennies with the best of them, adopting vegetarianism only so that the money saved on meat could go into his savings and studies. Yet, all that said, Isaacson reminds us that Franklin essentially retired, wealthy and content, in his early 40s and devoted the rest of his days to doing acts of public good, pressing the cause of meritocracy in the service of “social mobility rather than an established elite” and furthering the cause of American independence at considerable risk to his property and person. Isaacson charts the trajectory of Franklin’s political thought on all kinds of matters; he notes, for instance, that although Franklin enthusiastically accepted advertisements for slave sales in the newspapers he published and owned “one or two household slaves off and on for much of his life,” he came to see the incompatibility of such commerce with the revolutionary ideals he espoused and ended his days as a committed abolitionist. Similarly, as the very exemplar of a self-made man, Franklin gave much thought to the inequalities wrought by inherited fortune, arguing “that the accumulation of excess wealth and the idle indulgence in frivolous luxuries should not be socially sanctioned.” Alas, Franklin’s arguments did not carry the day in most particulars, but he remains an ideal American type—and one well served by this sympathetic and admiring study.

A little less sophisticated than H.W. Brands’s The First American, but a solid contribution to Frankliniana all the same.