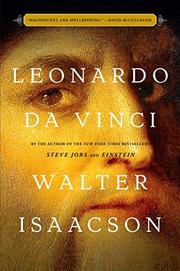 A majestic biography of “history’s most creative genius.”

With many exceptional popular history books under his belt, Isaacson (History/Tulane Univ.; The Innovators: How a Group of Hackers, Geniuses, and Geeks Created the Digital Revolution, 2014, etc.) is close to assuming the mantle currently held by David McCullough. Here, Isaacson takes on another complex, giant figure and transforms him into someone we can recognize. The author believes the term “genius” is too easily bandied about, but Leonardo (1452-1519), from the tiny village of Vinci, near Florence, was “one of the few people in history who indisputably deserved—or, to be more precise, earned—that appellation.” He was self-taught and “willed his way to his genius.” With joyous zest, Isaacson crafts a marvelously told story “of a misfit: illegitimate, gay, vegetarian, left-handed, easily distracted, and at times heretical.” Like a child in a candy store, Isaacson often stops to exclaim; he shares his enthusiasm, and it’s contagious. For the author, the starting point are da Vinci’s notebooks, all 7,200 pages, the “greatest record of curiosity ever created.” Da Vinci’s groundbreaking, detailed drawings charted the inner worlds of the skull, heart, muscles, brain, birds’ wings, and a working odometer, along with doodles and numerous to-do lists. In his iconic Vitruvian Man, completed when he was 38 and struggling to learn Latin, “Leonardo peers at himself with furrowed brow and tries to grasp the secrets of his own nature.” Isaacson is equally insightful with the paintings, of which there are few. The Last Supper is a “mix of scientific perspective and theatrical license, of intellect and fantasy.” Regarding the uncompleted Mona Lisa, he writes “never in a painting have motion and emotion, the paired touchstones of Leonardo’s art, been so intertwined.” As Isaacson wisely puts it, we can all learn from Leonardo.

Totally enthralling, masterful, and passionate, this book should garner serious consideration for a variety of book prizes.