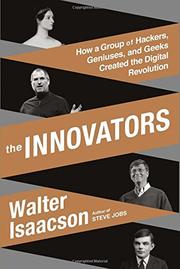 How a Group of Inventors, Hackers, Geniuses, and Geeks Created the Digital Revolution

A panoramic history of technological revolution.

“Innovation occurs when ripe seeds fall on fertile ground,” Aspen Institute CEO Isaacson (Steve Jobs, 2011, etc.) writes in this sweeping, thrilling tale of three radical innovations that gave rise to the digital age. First was the evolution of the computer, which Isaacson traces from its 19th-century beginnings in Ada Lovelace’s “poetical” mathematics and Charles Babbage’s dream of an “Analytical Engine” to the creation of silicon chips with circuits printed on them. The second was “the invention of a corporate culture and management style that was the antithesis of the hierarchical organization of East Coast companies.” In the rarefied neighborhood dubbed Silicon Valley, new businesses aimed for a cooperative, nonauthoritarian model that nurtured cross-fertilization of ideas. The third innovation was the creation of demand for personal devices: the pocket radio; the calculator, marketing brainchild of Texas Instruments; video games; and finally, the holy grail of inventions: the personal computer. Throughout his action-packed story, Isaacson reiterates one theme: Innovation results from both “creative inventors” and “an evolutionary process that occurs when ideas, concepts, technologies, and engineering methods ripen together.” Who invented the microchip? Or the Internet? Mostly, Isaacson writes, these emerged from “a loosely knit cohort of academics and hackers who worked as peers and freely shared their creative ideas….Innovation is not a loner’s endeavor.” Isaacson offers vivid portraits—many based on firsthand interviews—of mathematicians, scientists, technicians and hackers (a term that used to mean anyone who fooled around with computers), including the elegant, “intellectually intimidating,” Hungarian-born John von Neumann; impatient, egotistical William Shockley; Grace Hopper, who joined the Army to pursue a career in mathematics; “laconic yet oddly charming” J.C.R. Licklider, one father of the Internet; Bill Gates, Steve Jobs, and scores of others.

Isaacson weaves prodigious research and deftly crafted anecdotes into a vigorous, gripping narrative about the visionaries whose imaginations and zeal continue to transform our lives.