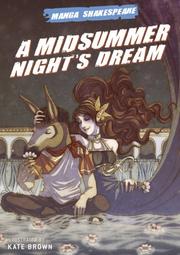 Of late many classic titles—including the Bible—have been turned into manga, in a 21st-century version of the venerable Classics Illustrated comics. This take on the Bard boils his play down to approximately 20 words per page, drastically abridging the text, though keeping intact the original language and meter. A fully colored dramatis personae reduces the characters to sound bites and shines in comparison to the flat, gray-toned images that murkily tell the story itself. As drawn by Brown, the characters are decidedly more Western-looking in their styling than is typical to most manga, and the adaptor’s choice of setting is an anachronistic mishmash of quasi-antique and modern, a choice that will leave sophisticated readers knowledgeable with the text slightly puzzled. The Tempest (ISBN: 978-0-8109-9476-8), drawn by Paul Duffield, follows an identical template. These attempts to convert Shakespeare into visual language fall flat, although the slick manga styling alone may attract some new readers to these works. (plot summary, author’s biography) (Graphic fiction. 13 & up)