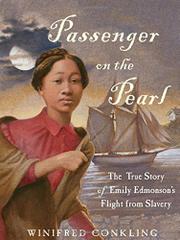 PASSENGER ON THE PEARL

The True Story of Emily Edmonson's Flight from Slavery

In her first work of nonfiction for young readers (Sylvia & Aki, 2011), Conkling presents the true story of Emily Edmonson and her five siblings who escaped from slavery only to be caught and sent further south.

Amelia Culver never wanted to marry, knowing marriage meant inevitable heartbreak when children were born into slavery and sold in the slave markets. But she married Paul Edmonson anyway, and sure enough, her children, upon reaching age 12 or 13, were taken and hired out in Washington, D.C. Her 13-year-old daughter Emily and Emily’s siblings shared their mother’s dream of freedom, and in 1848, they took part in what became the largest slave escape attempt in American history. Down the Potomac River they fled on the Pearl, and by the time they neared the Chesapeake Bay, they were captured and sold South, where Emily and her sister Mary were in danger of being sold into the sex trade. Eventually, they were returned to Virginia and ransomed with help from the Rev. Henry Ward Beecher, whose sister, Harriet Beecher Stowe, modeled characters in Uncle Tom’s Cabin on Emily and Mary Edmonson. Clearly written, well-documented, and chock full of maps, sidebars, and reproductions of photographs and engravings, the fascinating volume covers a lot of history in a short space. Conkling uses the tools of a novelist to immerse readers in Emily’s experiences.

A fine and harrowing true story behind an American classic.