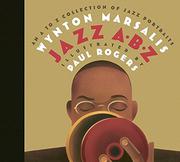 An A to Z Collection of Jazz Portraits

At last: a jazz book that thrillingly, exhilaratingly, palpitatingly gets it. Jazz master Marsalis presents a cycle of poems that alliteratively jitterbugs through some 26 verse forms and 26 jazz greats, from Louis Armstrong to Dizzy Gillespie. These poems are set against Rogers’s striking black-and-earth-toned poster-like prints and represent a sort of verbal immersion in jazz. Readers are invited to join in the performance poem that celebrates Art Blakey/Abdullah Ibn Buhaina, presenting them with drum beats and riffs that punctuate the stanzas. A syncopated limerick presents Gerry Mulligan, a nursery rhyme, Nat “King” Cole, a sonnet, Sarah Vaughan. The poems clearly do not aim for straight biography, instead plunging readers into a direct jazz experience, the alliteration, rhythm and rhyme creating the meaning instead of containing it. The alphabet poem that dizzyingly, dazzlingly introduces a deeply shadowed Ornette Coleman riffs giddily through the alphabet, the string of words meaningless in themselves but resulting in a concatenation of sounds that channels his avant-garde saxophone directly into readers’ ears. Brief biographical sketches by Phil Schaap and notes on the verse forms round out the text, which closes, appropriately enough, with a discography. Yeahhhh. (Poetry. YA)