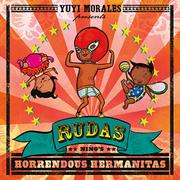 Pint-sized luchador Niño captured readers’ imaginations in the Pura Belpré Award–winning title Niño Wrestles the World (2014). Now he is back, but this time his baby sisters, Las Hermanitas, have come to steal the show.

Childlike drawings on the opening endpapers explain that luchadores are divided into two categories: técnicos (good guys) and rudos (bad guys). Las Hermanitas are definitely rudas. Niño is playing with some familiar characters, El Extraterrestre and La Llorona, when Las Hermanitas burst onto the scene and the rumble begins. They take on their opponents one by one and use whatever rotten means necessary to crush the competition, starting right off with a move called the Poopy Bomb Blowout. The action and humor continue until only Niño can bring an end to his little sisters’ destruction. This follow-up uses the same playful, graphic illustration style and vibrant color palette seen in the original. Several Spanish words and phrases appear in the callouts and speech bubbles, many of which are defined in the closing endpaper illustrations. The English text is peppered with alliteration, onomatopoeia, and a few words that will stretch young readers’ growing vocabulary (such as “phenomenal” and “preposterous”). The overall effect is a narrative that begs to be read aloud.

A rowdy, raucous return for Niño and a dazzling debut for his most worthy rivals.