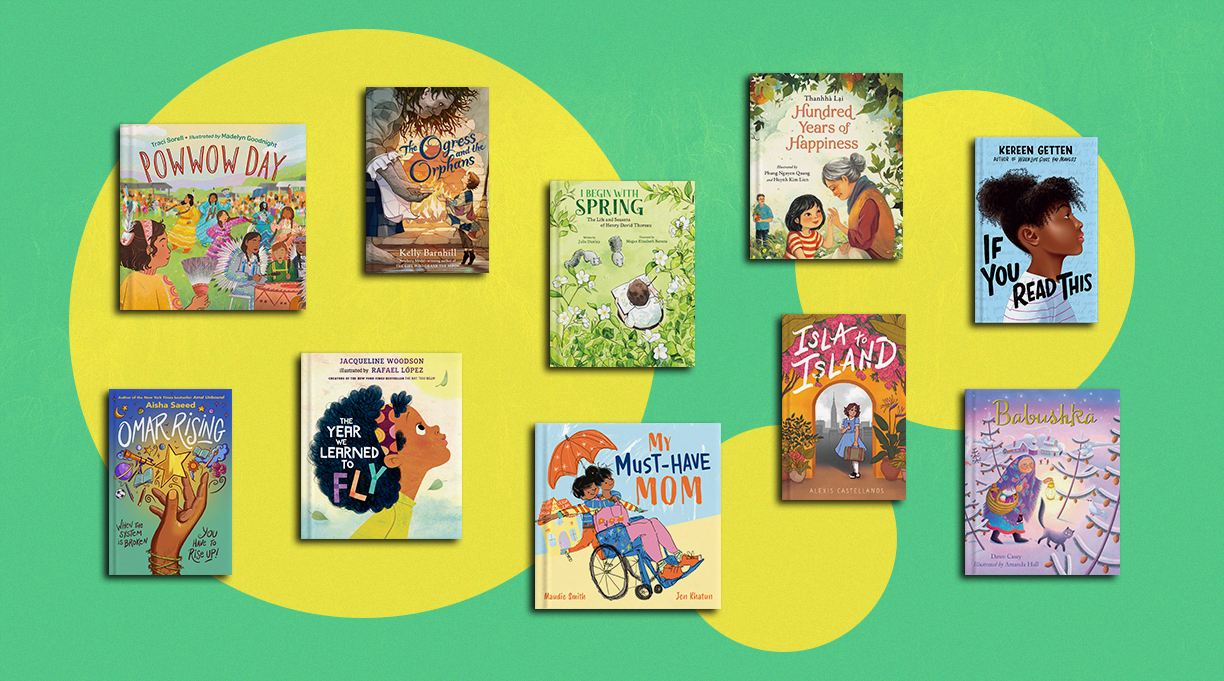 Many of us can remember a time when cinema’s “coming attractions” were advertised in the daily newspapers. Some might even recall how the phrase—COMING ATTRACTIONS—would loom on movie screens right before the previews (as film trailers were once called). Today, the phrase occasionally appears on historic theater marquees, but “Coming Soon” is entertainment’s new tag line, and the book world has followed suit. Instant gratification is the draw nowadays, and yet…there is something alluring about the temporal nonspecificity of a “Coming Attraction.” Without further ado, here are 10 of 2022’s.

Alighting on shelves early is Jacqueline Woodson and Rafael López’s picture book, The Year We Learned To Fly (Nancy Paulsen Books, Jan. 4). A hymn to the power of the imagination to lift us above petty strife and life’s valleys, the book draws on the myth of avian humanoids who escaped slavery by flying back to Africa.

Sticking with the elevation theme, readers can also expect the Amal Unbound companion novel, Omar Rising (Nancy Paulsen Books, Feb. 1) by Aisha Saeed. Set in a Pakistani village, the story follows the eponymous protagonist, the son of a widowed servant, through his challenging first year at an exclusive boys’ academy.

Another early-year release to welcome gladly is Traci Sorell and Madelyn Goodnight’s Powwow Day (Charlesbridge, Feb. 8), which our reviewer describes as “a heartwarming picture book about the roles of courage, culture, and community in the journey of personal healing.” A young Native American girl recovering from an unspecified illness begins to turn a corner while experiencing a group jingle dress dance at a powwow gathering.

Begin March with I Begin With Spring: The Life and Seasons of Henry David Thoreau (Tilbury, March 1) by Julia Dunlap. Illustrated by Megan Elizabeth Baratta with a deep nod to the mid-19th-century nature journal, it’s an absorbing life history of the formidable philosopher, naturalist, and humanist, and it exemplifies narrative children’s nonfiction at the height of its powers.

My Must-Have Mom (Lantana, March 1) by Maudie Smith, with deceptively slapdash illustrations by Jen Khatun, merits a mention. Jake, a brown-skinned boy, worries that his mom’s compulsion for upcycling discarded objects means that she might eventually want to upgrade him. The titular Mom happens to use a wheelchair.

No year’s reading is complete without a touch of the speculative. Cue Kelly Barnhill’s middle-grade novel, The Ogress and the Orphans (Algonquin, March 8), about a bighearted monster and a family of White foundlings who redeem a beleaguered community that has lost its way…and its heart. It’s a sequel to Barnhill’s 2016 Newbery Medal winner, The Girl Who Drank the Moon.

Travel back to a not-too-distant, culturally distinctive era with Isla to Island (Atheneum, March 15), Alexis Castellanos’ arresting, wordless graphic-novel debut about a Cuban girl who flees her island’s revolution and must forge a new sense of home in 1960s America.

As spring ripens, it’s the perfect time to read Thanhhà Lai’s picture-book debut, Hundred Years of Happiness (HarperCollins, April 5), whose verdant digital paintings by Nguyen Quang are lush with vernal sensibility. With her grandfather’s help, a young Vietnamese American girl patiently cultivates g?c vines in an attempt to “untangle” the jumbled memories of her grandmother with Alzheimer’s.

Make the most of middle-grade summer reading with Kereen Getten’s If You Read This (Delacorte, Aug. 16). A Black tween girl floundering in the aftermath of her mother’s death receives a special gift from her estranged father that takes her and her friends on a life-changing quest all over their Caribbean island home.

Finally, start getting into the Christmas spirit early with the new edition of Dawn Casey’s Babushka: A Classic Folk Tale for Christmas (Lion, Aug. 19). Luminously illustrated by Amanda Hall, it’s a retelling of the (dubiously Russian) legend of an old woman who met the Three Wise Men on their way to see Jesus.