10 Nonfiction Books From Around the World 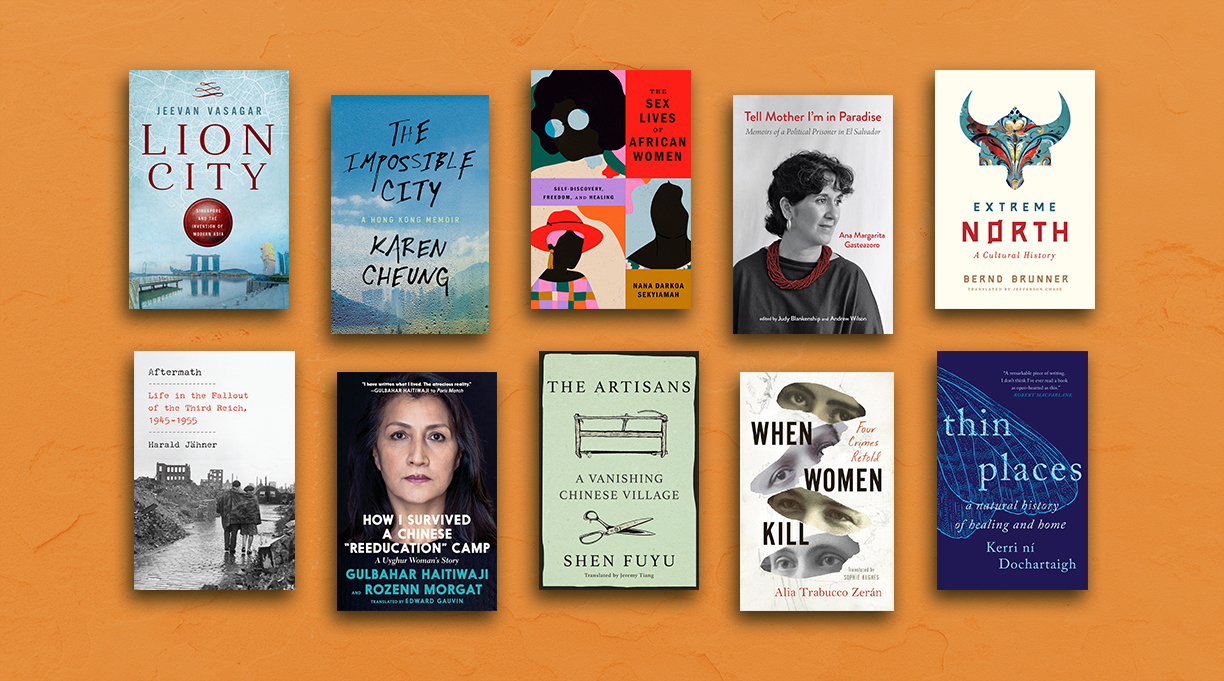 Background by Wesley Tingey on Unsplash

Welcome to the inaugural International issue, in which we celebrate literature that extends our knowledge past the confines of our borders. Here are 10 excellent books—new or forthcoming—about people and customs from around the world, along with what Kirkus reviewers had to say about them.

The Artisans: A Vanishing Chinese Village by Shen Fuyu, translated by Jeremy Tiang (Astra House, Jan. 4): “A Chinese journalist’s intimate vignettes reveal the lives of citizens from his rural hometown, unearthing a deep layer of Chinese history rarely seen beyond its borders.”

Aftermath: Life in the Fallout of the Third Reich, 1945-1955 by Harald Jähner, translated by Shaun Whiteside (Knopf, Jan. 11): “In his engrossing first book, Jähner, the former editor of the Berlin Times, examines how and why Germany was capable of radically transforming from a sinister fascist mindset toward a modern democratic state. The author presents an expansive yet sharply probing overview of the period.”

The Impossible City: A Hong Kong Memoir by Karen Cheung (Random House, Feb. 8): “A powerful memoir of love and anguish in a cold financial capital with an underbelly of vibrant, freedom-loving youth.”

Extreme North: A Cultural History by Bernd Brunner, translated by Jefferson Chase (Norton, Feb. 15): “An investigation of the cultural history and mythology of ‘the North,’ which ‘represents a space both real and imaginary’.…In an engaging, sometimes academic tone, the author analyzes how the idea of the North has evolved over the centuries. Among the many topics he explores are early European fears of Viking raids, the effects of the European obsession with finding a northwest passage to China, and Norse myths and fairy tales.”

Lion City: Singapore and the Invention of Modern Asia by Jeevan Vasagar (Pegasus, March 1): “In his first book, Vasagar, former Singapore and Malaysia correspondent for the Financial Times, fashions an engaging narrative that is both historical and personal; his father lived in Singapore, and the author often visited as a child.…An accessible, ground-up journalistic study well suited to those who know little about this enigmatic republic.”

Tell Mother I’m in Paradise: Memoirs of a Political Prisoner in El Salvador by Ana Margarita Gasteazoro, edited by Judy Blankenship and Andrew Wilson (Univ. of Alabama, April 5): “A wrenching oral history/memoir of a Salvadoran political activist and revolutionary. Many of her friends were ‘disappeared,’ and Gasteazoro led a dangerous underground life until she was eventually arrested, tortured, and imprisoned for two years.”

Thin Places: A Natural History of Healing and Home by Kerri ní Dochartaigh (Milkweed, April 12): “A luminous memoir about growing up in Northern Ireland during the Troubles.”