5 Haunting Tales of the Paranormal for Kids 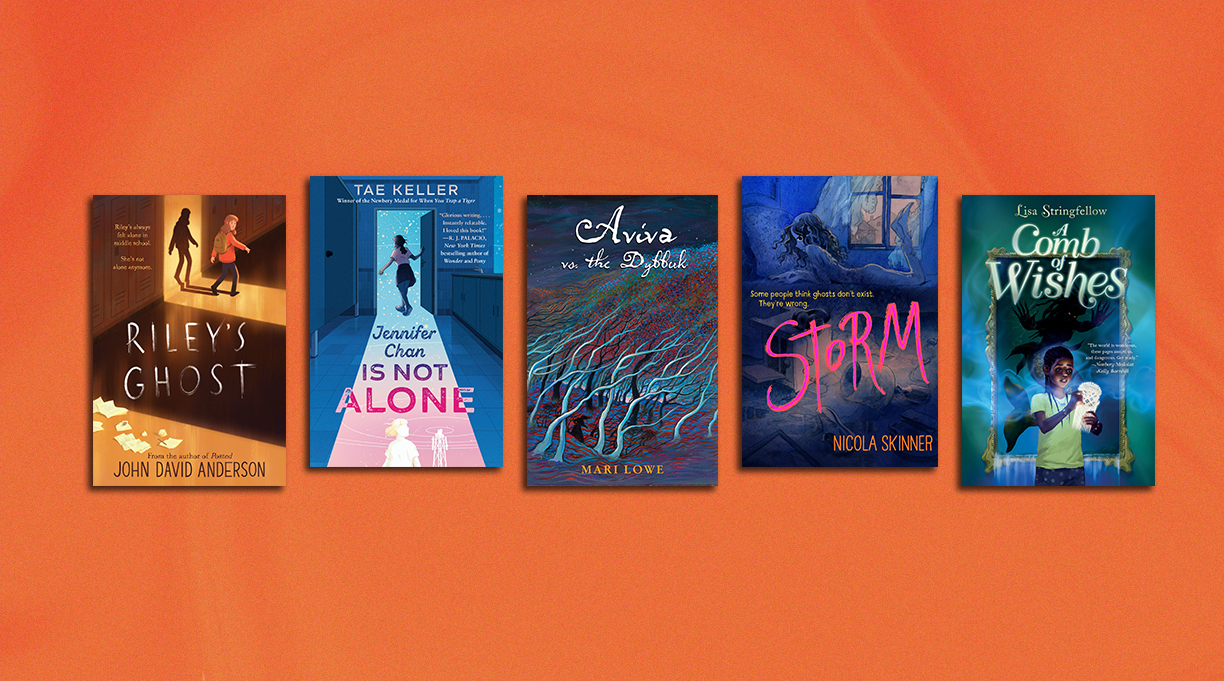 For many children, there’s nothing better than diving into a deliciously frightening tale of suspense. Some stories, like the middle-grade novels listed below, also help readers grapple with tough experiences. Death, bullying, loneliness, rage—topics that might be overwhelming in a work of realistic fiction—often become more manageable when folded into a novel with paranormal themes. In some of these books, the spooky elements are merely hinted at—they may even be figments of the characters’ imaginations—while in others, they’re front and center. All will leave readers moved and perhaps a little more prepared to face challenges of their own.

Trapped in the science supply closet by bullies, the protagonist of Riley’s Ghost (Walden Pond Press/HarperCollins, Jan. 11) by John David Anderson escapes to find herself locked in the school. No one is around to free her, but Riley (who’s coded White) is not alone—the ghost of Max, an adult man who has possessed a dead lab frog, is here, and so is someone more sinister. Riley’s memories of being bullied and lashing out in rage blend with glimpses of a troubled student from decades ago, making for a spooky tale tinged with melancholy—as Riley’s father puts it, “Ghost stories are all about loss.”

A Comb of Wishes (Quill Tree Books/HarperCollins, Feb. 8) by Lisa Stringfellow follows Kela, a 12-year-old Black girl in St. Rita, a fictional Caribbean island. Reeling in the wake of her mother’s death, Kela finds a magical comb that belongs to Ophidia, a mermaid. Legend has it that mermaids will grant wishes to anyone who returns a comb, but those who keep the comb face a terrifying fate. Laced with Caribbean folklore, this atmospheric tale is by turns poignant and haunting. Though the focus is on Kela’s grief, Ophidia is especially well drawn, torn between an urge for tenderness and a desire for vengeance.

Set in a White, Orthodox Jewish community, Aviva vs. the Dybbuk (Levine Querido, Feb. 22) by Mari Lowe centers on a young girl whose life is shattered after her father’s death. Her mother withdraws, her contact with the outside world limited to the women she attends at the mikvah; Aviva’s pain is a burden she shoulders alone, though the antics of the dybbuk, a ghostly prankster who haunts the mikvah, are a distraction. A swastika drawn in cement near Aviva’s home makes clear that there are darker things in the world than the mischievous dybbuk, but, as this tender reflection on grief and loneliness illustrates, community and friendship can set us on the path to healing.

Storm by Nicola Skinner (Harper/HarperCollins, March 29) brims with its protagonist’s fury. In life, Frankie, ruddy-cheeked with curly hair, fought to keep her anger in check; in death, she’s a poltergeist who, a century later, lets herself rage at the tourists who come to gawk at the house her family once lived in. Skinner blends compelling worldbuilding and humor—Frankie’s sarcastic observations about her free-spirited parents are especially witty—with a sensitive exploration of the raw hurt masked by the protagonist’s explosive anger.

When the title character of Jennifer Chan Is Not Alone (Random House, April 26) by Tae Keller goes missing, narrator Mallory (who is biracial—Korean and presumed White) wonders if Jennifer’s disappearance has something to do with her belief in aliens. Keller ramps up the suspense, moving between the past, when Mallory, in thrall to her popular friends, finds herself treating Jennifer with unspeakable cruelty, and the present, as a guilt-ridden Mallory searches for Jennifer and investigates the possibility of extraterrestrial life. Are we alone in the universe? Unclear, but as Keller’s probing, deeply empathetic look at friendship shows us, here on Earth, we’re all tightly intertwined, for better or worse.