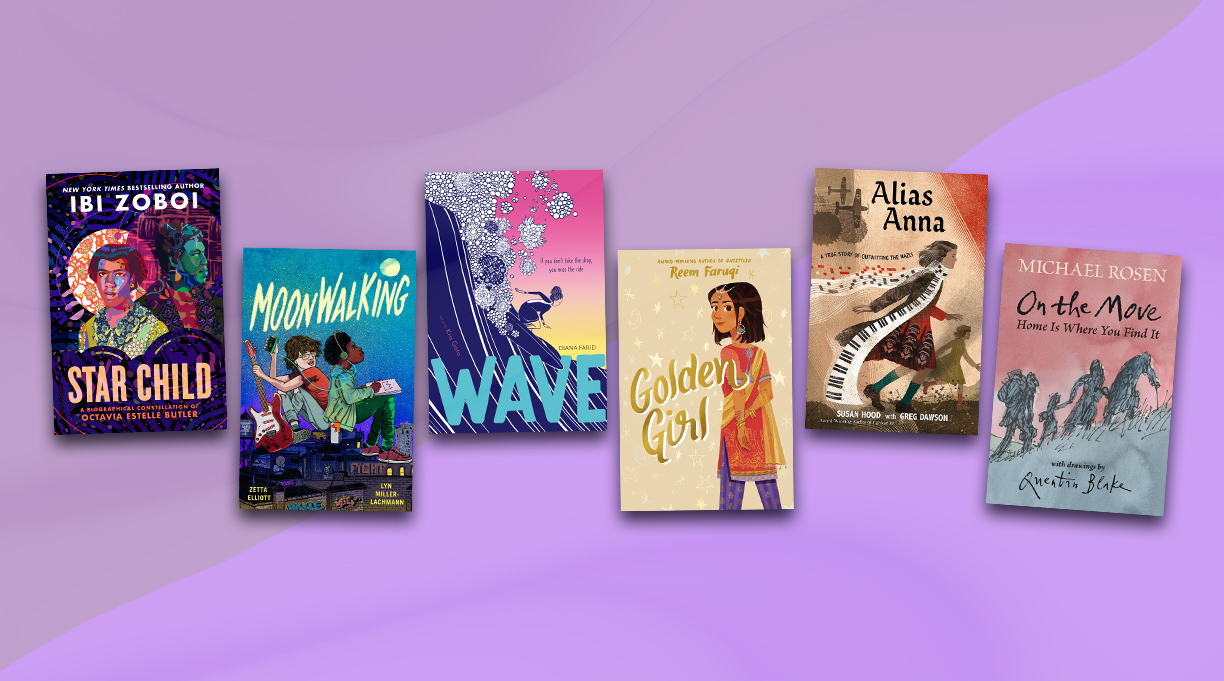 Each April, the Academy of American Poets’ National Poetry Month is a joyful opportunity to celebrate the enduring appeal and power of verse. Young people are particularly fortunate in the wealth of poetry titles available to them, from rhyming picture books and poetry anthologies to verse covering genres from realistic fiction to nonfiction on a broad range of subjects. These early 2022 titles for middle-grade readers offer a sampling of riches to dive into.

Wave by Diana Farid, illustrated Kris Goto (Cameron Kids, March 29): In this deeply emotional, beautifully illustrated verse novel set in Southern California in the 1980s, rising ninth grader Ava is the daughter of a Persian immigrant single mom. Ava experiences a blissful sense of escape from her pressing worries through music, poetry, and surfing. Immersing herself in the sights and smells of the ocean offers respite from her OCD, feelings of cultural dislocation, and worries about her best friend’s cancer recurrence.

Golden Girl by Reem Faruqi (Harper/HarperCollins, Feb. 22): The Pakistani American tween at the center of this heartwarming story is relatably imperfect: Aafiyah is a well-intentioned girl who loves her family, enjoys playing tennis, values her Muslim faith, collects unusual facts—and struggles with kleptomania. When life’s stresses pile up—her father is detained in Dubai as the family travels home to Atlanta from Karachi, and her beloved grandfather’s cancer causes financial strain—she's tempted to do something with major consequences.

Alias Anna: A True Story of Outwitting the Nazis by Susan Hood with Greg Dawson (Harper/HarperCollins, March 22): This verse biography, co-written by the son of one of the subjects, tells the remarkable, breathtaking story of Zhanna and Frina Arshanskaya, Jewish sisters from Ukraine who were among the few to escape the Nazis’ mass killings at Drobitsky Yar in 1941. At ages 14 and 12, they were able to obtain help from kind strangers and start new lives with forged papers. Talented pianists, the girls survived World War II while performing across Europe.

On the Move: Home Is Where You Find It by Michael Rosen, illustrated by Quentin Blake (Candlewick, Feb. 8): This collaboration between two children’s literature legends resulted in a collection of poems exploring themes of family, dislocation, and loss accompanied by haunting and atmospheric illustrations. Inspired by Rosen’s own family’s history, including tragic deaths during the Holocaust and a British childhood colored by casual antisemitism, this tribute to human resilience tells stories of migrants and refugees that echo across many times and places.

Star Child: A Biographical Constellation of Octavia Estelle Butler by Ibi Zoboi (Dutton, Jan. 25): A visionary Black science-fiction legend whose writing resonates more powerfully than ever is the focus of this work that blends poetry, prose, photographs, and quotations from Butler herself. Young readers get to know Butler’s life, personality, and sources of inspiration as well as details about the times in which she grew up and which deeply influenced her writing. Zoboi's evocative writing includes concrete poems among other varied formats.