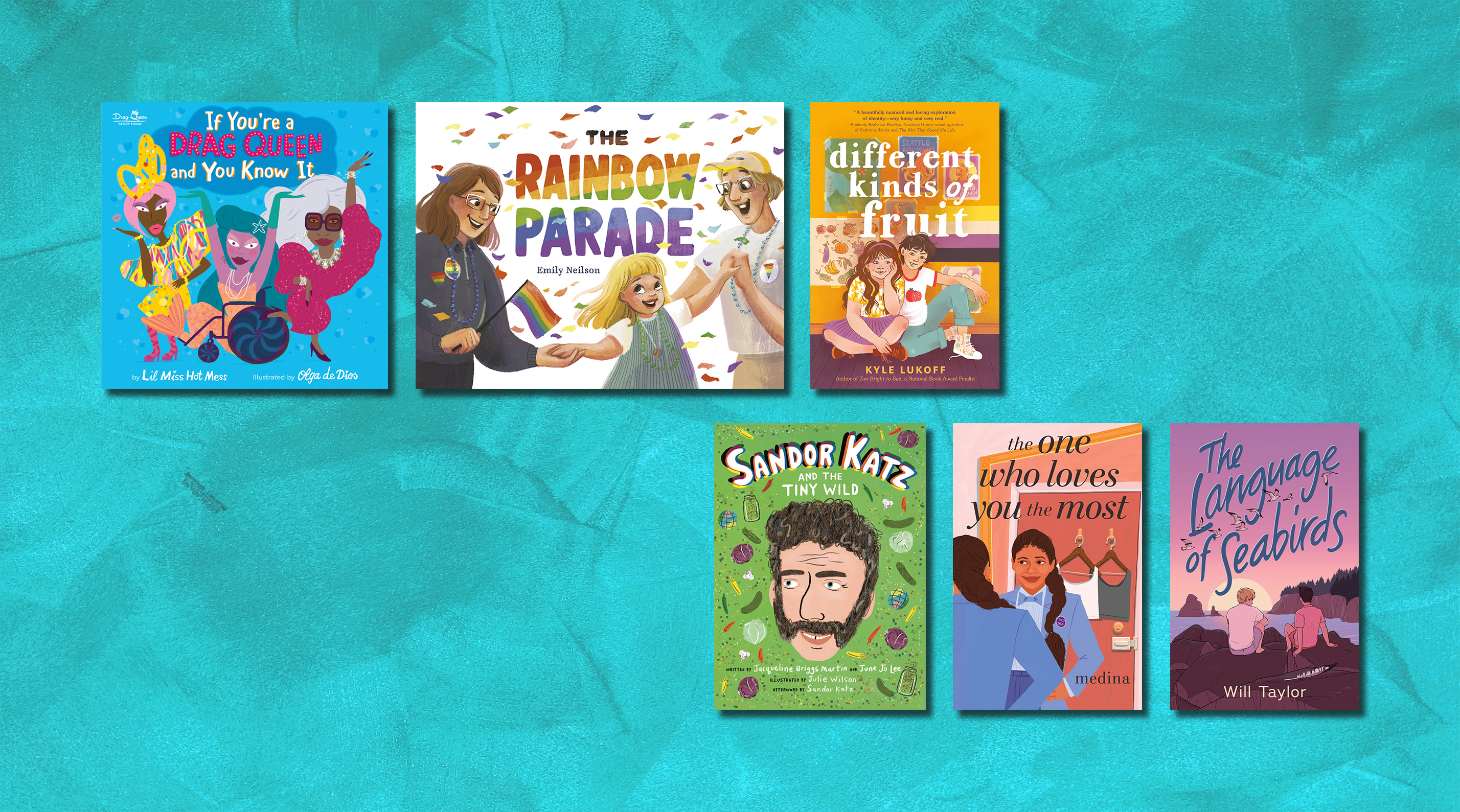 Background by Valentin Salja on Unsplash

Growing up, I encountered few, if any, books with queer characters. The happy endings of these books—mostly YA—were often quiet ones, and sometimes mere survival was as close to a happy ending as readers got, as with Sandra Scoppettone’s Happy Endings Are All Alike (1978). It’s uplifting now to see queer stories, like the picture books and middle-grade novels spotlighted here, that are told for a much younger audience and feature characters who strive not just for survival, but for joy and community. At a time when people’s very identities are being debated, these books are reminders to queer youth that they matter—and that they belong.

When Annabelle, the protagonist of Different Kinds of Fruit by Kyle Lukoff (Dial, April 12), befriends new student Bailey, who is nonbinary, she assumes they are the first queer person she’s ever been close to—until her parents start opening up about their own identities and she begins to question her own. As Lukoff matter-of-factly explores a range of queer identities, Annabelle’s winsome, quirky voice keeps this edifying novel from ever being didactic.

Assigned an essay on their “authentic self,” Gabriela, the protagonist of medina’s The One Who Loves You the Most (Levine Querido, May 10), struggles. As a Honduran child adopted by a White mother, they’ve long wondered where they fit, but new friends Abbie, who is trans and intersex, and Héctor, who’s bisexual and genderfluid, help Gabriela figure it out. Through prose that’s spare but brimming with honesty, medina offers a resonant depiction of a young queer person carving out a sense of self. (Read our interview with the author.)

With If You’re a Drag Queen and You Know It (Running Press Kids, May 17), Lil Miss Hot Mess once more offers an inspired, queer take on a beloved childhood song (after 2020’s The Hips on the Drag Queen Go Swish, Swish, Swish). Olga de Dios Ruiz again illustrates, with a diverse group of queens who certainly do “know it” and “show it” by blowing kisses, striking dynamic poses, and shouting, “Yesss Queen!” Oozing color and movement, the art is a showstopper, while the text will have kids singing along.

With her picture book The Rainbow Parade (Dial, May 31), Emily Neilson draws from her memories of attending San Francisco Pride with her mothers. Though young Emily loves watching the parade, she’s hesitant to join in, wondering if she belongs, but Mommy and Mama reassure her. Graceful art with swirls of color sets a festive tone, but Neilson’s sensitive text also acknowledges that forging an identity can be tough: “Sometimes finding your pride takes a little practice,” as Mommy puts it.

Jacqueline Briggs and June Jo Lee’s picture-book biography Sandor Katz and the Tiny Wild (Readers to Eaters, June 7) follows the food writer and activist from his childhood on New York’s Lower East Side to, after receiving an HIV-positive diagnosis in 1991, rural Tennessee, where he flourished among a community of other queer people and channeled his pain into experiments with fermentation. Though the text touches on sadness, it nevertheless exudes an energy matched by Julie Wilson’s vibrant illustrations, often drawn in exuberant scrawls; the result is a triumphant celebration of food and community.

The Language of Seabirds by Will Taylor (Scholastic, July 19) finds 12-year-old Jeremy spending two weeks at the beach with his unstable, recently divorced father and his uncle. The guarded preteen—who conceals a love of fashion magazines and an attraction to other boys—opens up when he meets and falls for Evan. This quiet yet potent novel acknowledges Jeremy’s very real fears but emphasizes the joys of embracing his true self. As Taylor notes, “The risk had made him happy. That was something to hold on to. He wanted more than safety now.”