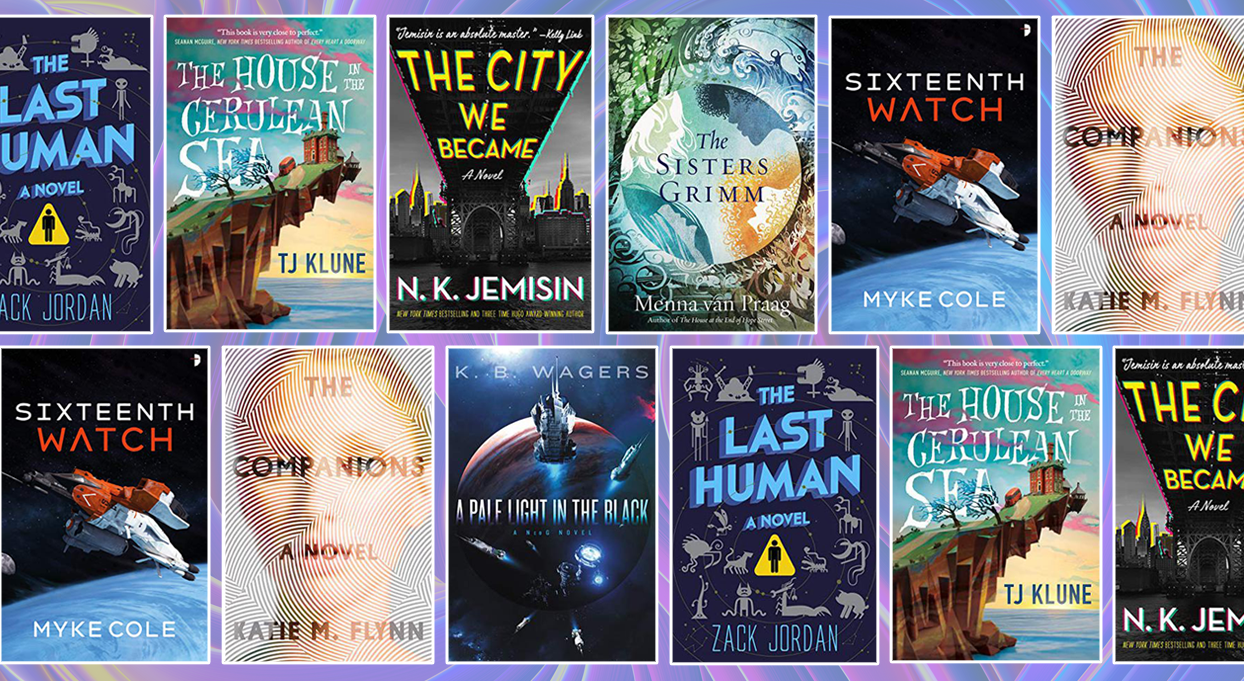 Science fiction and fantasy takes reading to a whole new level by weaving fantastical elements into an already great story. Check out any of these imagination infused SF/F reads available in March and see for yourself.

WHAT IT’S ABOUT: In the near future, the Metis Corporation has figured out a way to upload the consciousness of a dying person into a machine. The so-called Companions are then sold to the wealthy, who are sequestered in high-rise towers in the wake of a deadly virus that has decimated millions. While the dying rich can live forever as wards of their families, the only option for those less fortunate is to lease their consciousness to strangers. Sixteen-year-old Lilac, a murder victim, has been a companion for years. Somehow, she is able to override her programming, escape her life of slavery, and search for her killer.

WHY YOU MIGHT LIKE IT: The depth of the characterizations in Flynn’s tour de force lends weight to this examination of what it means to be human.

A Pale Light in the Black by K. B. Wagers (Harper Voyager, March 3)

WHAT IT’S ABOUT: In the 25th century, the space around Earth is protected by a military force known as Near-Earth Orbital Guard (NeoG). The crew of the NeoG ship Zuma’s Ghost, preparing to compete in a military game competition, suffers the reassignment of their best swordsman. Replacing him is Maxine Carmichael, a lieutenant trying to escape the influence of her powerful family. In addition to earning the trust of her new team, Maxine must also contend with a routine mission gone horribly wrong—one that leads to members of her team being killed.

WHY YOU MIGHT LIKE IT: This space adventure is a departure from other military science fiction entries that depict grim futures and endless warfare.

WHAT IT’S ABOUT: U.S. Coast Guard Capt. Jane Oliver is gearing up for retirement when she suffers the devastating loss of her husband, a tragedy she witnesses firsthand in a battle between American and Chinese forces on the moon. As tension between the two nations escalates toward a lunar war, Oliver is promoted to admiral and asked to prove the value of the Coast Guard, just as rival U.S. services seek to oust them from extraterrestrial jurisdiction.

WHY YOU MIGHT LIKE IT: Cole leverages his real-life military background to create a believable depiction of conflict in space with an emphasis on authentic characters.

The House in the Cerulean Sea by TJ Klune (Tor, March 17)

WHAT IT’S ABOUT: Linus Baker is a by-the-book caseworker in the Department in Charge of Magical Youth. He’s sent to an orphanage for magical children on a remote island to observe six dangerous youngsters who could bring about the end of the world. Arthur, who runs the orphanage, makes it clear to the rules-loving bureaucrat that he will do everything in his power to provide the children with a safe home on the island, even if it means defying a system that treats those who are different as second-class citizens.

WHY YOU MIGHT LIKE IT: This contemporary fantasy makes its themes of complacency and fighting for family more accessible by keeping the tone light.

WHAT IT’S ABOUT: In this well-imagined urban fantasy, New York City has matured to the point of sentience; it’s ready to come to life, embodying its soul in a representative avatar. But NYC’s avatar is weakened by its struggle with an extradimensional enemy, the Woman in White. Five people are called upon to represent each of the city’s boroughs in a fight to protect it. Their combined powers will be enough to enable the NYC avatar to defeat the Woman in White, but they must first find each other and learn to work together.

WHY YOU MIGHT LIKE IT: Fiction is most powerful when it shines a light on questionable human behavior. Jemisin’s story dramatically illuminates the racial tension that still exists in America.

WHAT IT’S ABOUT: When powerful aliens decide that humanity is classified as too dangerous to exist, all humans are eliminated—all, that is, except for Sarya, the last human being. Sarya feels like an outsider as she walks the corridors of the Watertower space station, resigned to not knowing the bigger questions of the universe. Then, an encounter with a bounty hunter and a miles-long kinetic projectile upend her life, placing her at the helm of a stolen spaceship, mingling with an android death enthusiast and a very smart ball of fluff. She may also have a shot at rebooting humanity.

WHY YOU MIGHT LIKE IT: Jordan’s unconventional space opera is a thrilling contest between godlike aliens and a lone human who has the power to make a difference.

WHAT IT’S ABOUT: “Once upon a time, a demon who desired earthly domination fathered an army of dark daughters to help him corrupt humanity…” So begins the magical tale of four half-sisters—Goldie, Liyana, Scarlet, and Bea—who were separated as teens and don’t know what fate lies ahead. They have only met in the dream world of Everwhere, and now, as the half-sisters near their shared 18th birthday, their inherited elemental powers begin to manifest. The sisters are meant to find each other and fight their father’s soldiers. The survivors will then stand by their demon father’s side as he rules a dark earth. But the sisters have other plans.

WHY YOU MIGHT LIKE IT: The Sisters Grimm combines love, mystery, and magic into something truly enchanting.

Here are the best short fiction reads arriving in March:

• A Phoenix First Must Burn edited by Patrice Caldwell (Viking)

• Made to Order: Robots and Revolution edited by Jonathan Strahan (Solaris)

• Sons of the Emperor by various (Black Library)

• The Empress of Salt and Fortune by Nghi Vo (Tor.com)

Are you eagerly awaiting the next book in a can’t-miss series? Here’s a rundown of releases from in-progress series:

• The Queen’s Bargain (The Black Jewels) by Anne Bishop (Ace)

• Servant of the Crown (The Dragonslayer) by Duncan M. Hamilton (Tor)

• The Nightmare Feast (Another Kingdom) by Andrew Klavan (Turner)

• A Broken Queen (The Nine Realms) by Sarah Kozloff (Tor)

• The Seared Lands (The Dragon’s Legacy) by Deborah A. Wolf (Titan Books)