8 Middle-Grade Books To Read This Fall 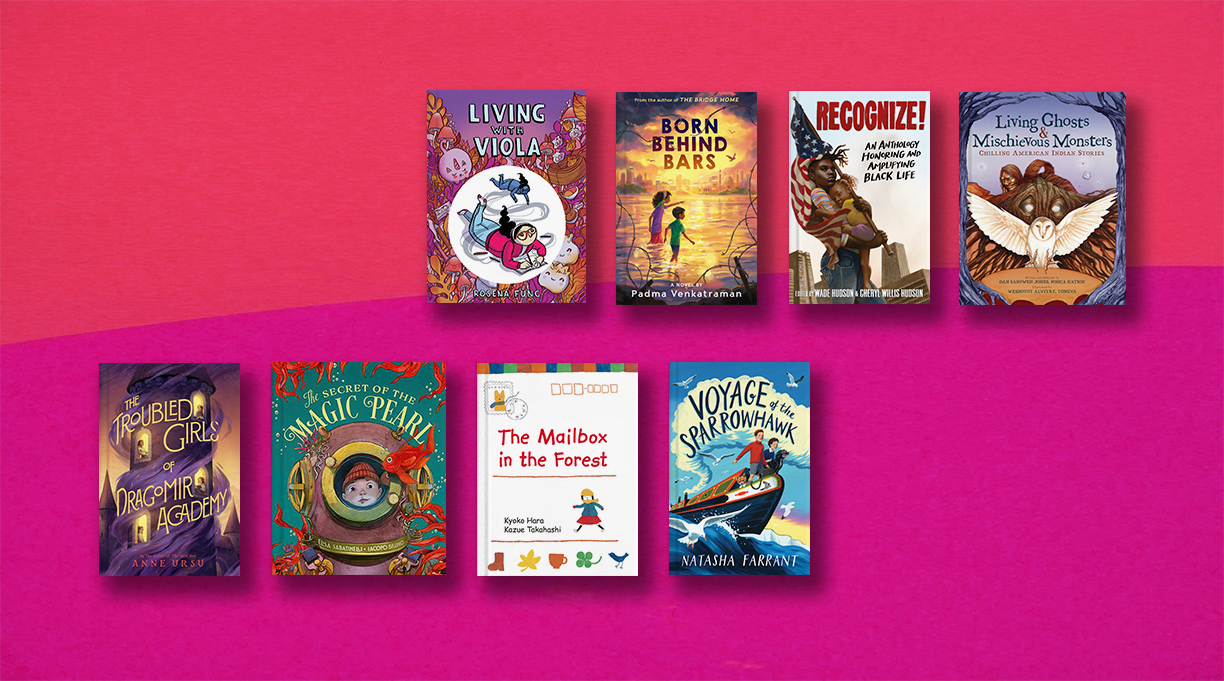 In the world of children’s books, new titles are more plentiful than apples in autumn. This represents a scant sampling of the season’s riches.

Written by Kyoko Hara, illustrated by Kazue Takahashi, and translated by Alexandrea Mallia, The Mailbox in the Forest (Museyon, Sept. 1) finds protagonist Mayu spending her winter vacation with her grandparents near the forest. Happening upon a “mailbocks” (it’s labeled) in a tree, the first grader forges an epistolary friendship with an earnest fox. Mayu easily accepts the concept of a letter-writing fox in this Japanese charmer.

With Living Ghosts and Mischievous Monsters (Scholastic Nonfiction, Sept. 7), Ponca filmmaker Dan SaSuWeh Jones turns to print for this collection of 32 chilling stories from a wide range of Native American storytellers and traditions. The geographical reach is impressive, as is the chronological one, taking readers back to the ancient Mississippian culture and bringing them up to the present day. Tongva illustrator Weshoyot Alvitre contributes pen-and-ink images that amplify the eeriness.

Born Behind Bars (Nancy Paulsen Books, Sept. 7) celebrates the resilience of and connection between two remarkable young people in India: Kabir, a boy born to an unjustly incarcerated Hindu mother and a missing Muslim father, and Rani, a girl from the marginalized Roma, or Kurava, community. Padma Venkatraman’s ultimately buoyant story of friendship despite many differences echoes across nations, cultures, and faiths as it highlights injustices many face worldwide.

The graphic-novel format of Living With Viola (Annick Press, Oct. 5) is ideal for showing the impacts of depression and panic disorder. Inspired by author Rosena Fung’s childhood, the story follows Olivia, the Canadian daughter of immigrants from Hong Kong, who feels weighed down by cultural dislocation and high expectations and isolated at her new middle school. Viola appears as the manifestation of the self-critical, negative thoughts in Olivia’s head.

Iacopo Bruno’s lush paintings illustrate Christopher Turner’s translation of Elisa Sabatintelli’s The Secret of the Magic Pearl (Red Comet, Oct.12), the story of 8-year-old Hector, latest in a line of deep-sea divers. His discovery of the titular pearl draws attention and complications—but Hector remembers his grandfather’s wise words and calms the seas. The liveliness of this largely White Italian coastal town makes it a character in its own right.

Natasha Farrant’s Voyage of the Sparrowhawk (Norton Young Readers, Oct. 12) is a rollicking adventure in which two young people in post–World War I England make a daring Channel crossing. Orphans Ben, 13, and Lotti, 12, along with their beloved dogs, leave behind the grim fates that await them at home. Ben refuses to believe that his missing older brother died in battle in France, and Lotti, neglected by heartless relatives, hopes to reach her French grandmother.

Following last year’s The Talk, editors Wade Hudson and Cheryl Willis Hudson return with Recognize! An Anthology Honoring and Amplifying Black Life (Crown, Oct. 12). With every selection underscoring the truth that Black lives matter, contributors explore the theme in essays, poetry, art, and graphic stories. Excerpts from the writings of Frederick Douglass, James Baldwin, and Ida B. Wells, among other historical greats, are interspersed with those from a who’s who of Black creators for young people.

Anne Ursu returns with The Troubled Girls of Dragomir Academy (Walden Pond Press/HarperCollins, Oct. 12), a thrilling fantasy enriched by feminist themes. Twelve-year-old Marya lives in the shadow of her brother in a world where boys’ magical potential is revered. When her actions cause her to be sent far from home to a remote school where girls are molded into useful tools in a patriarchal system, Marya starts to question everything society has told her is true.