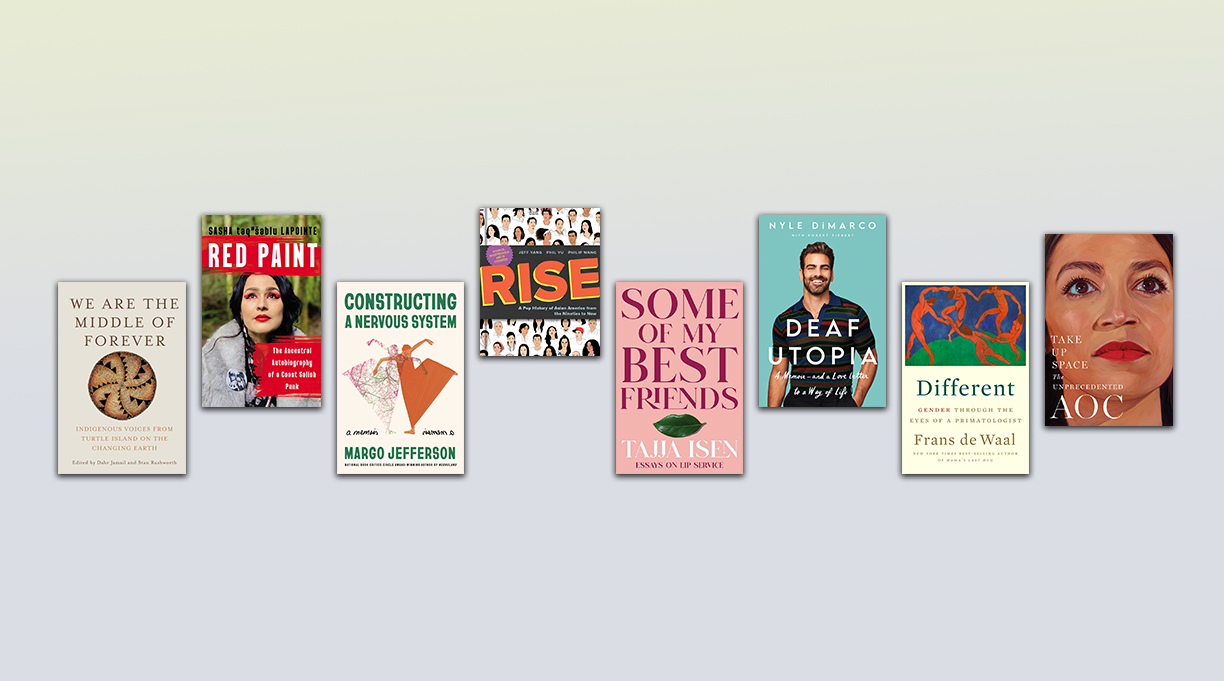 The concept of diversity is nuanced and sometimes difficult to grasp, but it’s vital to a thriving society. We all benefit from hearing stories from the widest possible variety of life experiences. Here are eight recent books that reflect numerous different—and necessary—viewpoints and what our reviewers had to say about them.

Rise: A Pop History of Asian America From the Nineties to Now by Jeff Yang, Phil Yu, and Philip Wang (Mariner Books, March 1): “A fun and informative book about the explosion of Asian American culture in recent decades.…This book—a collection of essays, interviews, illustrations, and even some comic-book pages—reflects [a] broad range…as imaginative in its presentation and stories as the generation it portrays.”

Red Paint: The Ancestral Autobiography of a Coast Salish Punk by Sasha LaPointe (Counterpoint, March 8): “A punk-infused memoir by a Coast Salish woman about her connection to her heritage.…Throughout the book, the author deftly navigates multiple timelines, weaving in and out of family history, personal narrative, and a host of other tangential topics.”

Different: Gender Through the Eyes of a Primatologist by Frans de Waal (Norton, April 5): “World-renowned primatologist de Waal draws on a long career of investigating chimpanzees and bonobos—both equally close to humans genetically—to argue with wit and clarity against assumptions about sex and gender that generate inequality.…The author enlivens his pages with attentive, sometimes moving portraits of animals he has encountered as well as anecdotes about his own experiences as one of six brothers.”

We Are the Middle of Forever: Indigenous Voices From Turtle Island on the Changing Earth edited by Dahr Jamail and Stan Rushworth (The New Press, April 5): A welcome compilation of interviews with Indigenous Americans about climate change.…Readers will be impressed by both the depth and breadth of the interviews as well as the contributors’ evocative, vivid storytelling and palpable emotion.”

Constructing a Nervous System: A Memoir by Margo Jefferson (Pantheon, April 12): “The Pulitzer Prize–winning critic and memoirist returns with an inspired and unstinting examination of American class, culture, and personal memory.…In [her previous memoir] Negroland, the author revealed the burdens of membership in a class of ambitious Black Americans, and she further details the impact on their children.”

Deaf Utopia: A Memoir—and a Love Letter to a Way of Life by Nyle DiMarco with Robert Siebert (Morrow/HarperCollins, April 19): “Unique and vividly written, the memoir effectively serves a dual purpose: to showcase the author’s life and exuberant pride as a Deaf individual and to bring increased awareness to the Deaf community by spotlighting ‘the beauty, power, [and] magic of [American Sign Language]’.…An honest, heartfelt, and thoroughly memorable portrayal of growing up Deaf.”

Some of My Best Friends: Essays on Lip Service by Tajja Isen (One Signal/Atria, April 19): “As a biracial Black performer who has done voice-over work in the U.S. and Canada for two decades, Isen has seen firsthand the many ways in which well-intentioned ideas on race, gender, and culture—whether promoted by liberals or conservatives—can hurt people they aim to help. In the nine essays in this stellar debut collection, the author probes the gap between expectation and reality.”