8 Nonfiction Books To Read This Summer 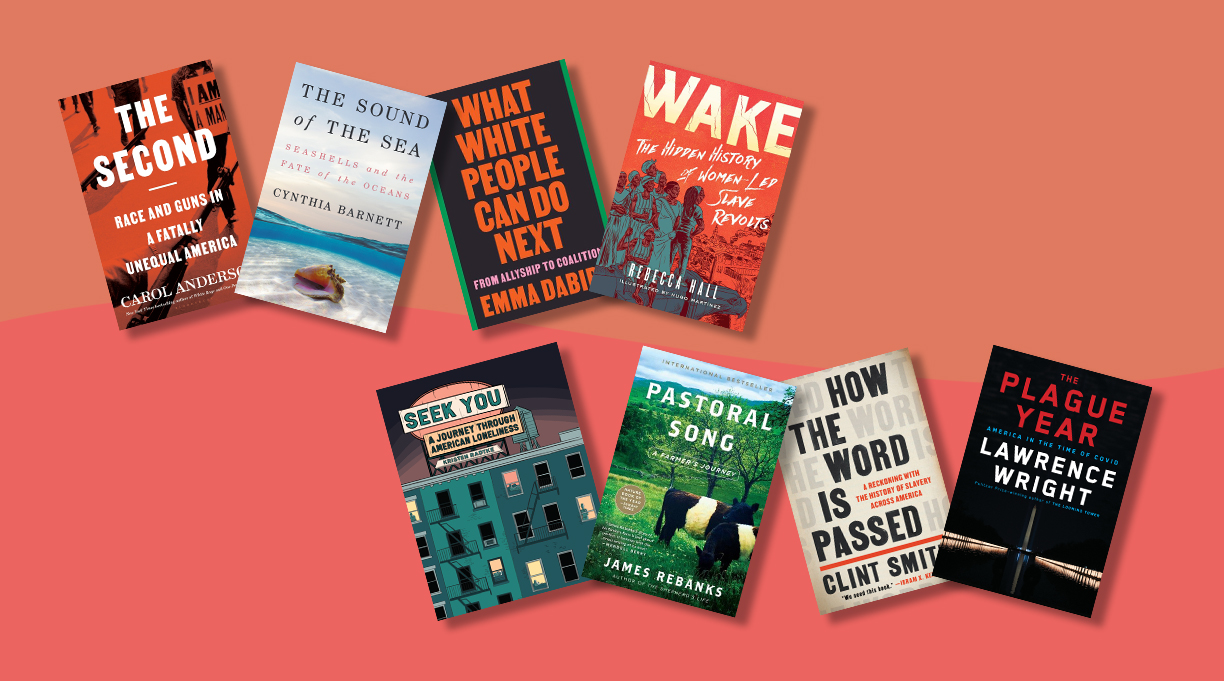 With the summer season approaching, it’s time to shed our blankets, sweatpants, and creative Zoom backgrounds and emerge from our collective pandemic slumber. What better way to soak in the sun while remaining socially distanced than reading a book outside? Here are eight nonfiction books to appeal to many reading tastes, from current affairs and politics to nature on land and in the sea. All quotes come from the starred Kirkus reviews.

The Second: Race and Guns in a Fatally Unequal America by Carol Anderson (Bloomsbury, June 1): “The author of White Rage (2016) returns with a powerful consideration of the Second Amendment as a deliberately constructed instrument of White supremacy….An urgent, novel interpretation of a foundational freedom that, the author makes clear, is a freedom only for some.”

Wake: The Hidden History of Women-Led Slave Revolts by Rebecca Hall; illustrated by Hugo Martínez (Simon and Schuster, June 1): “A vividly illustrated account of Black women rebels that combines elements of memoir, archival research, and informed imaginings of its subjects’ lives….The black-and-white illustrations nicely complement the text and elevate the artfulness and the power of the book, which begins and ends with scenes depicting women-led revolts aboard a ship Hall calls the Unity.”

How the Word Is Passed: A Reckoning With the History of Slavery Across America by Clint Smith III (Little, Brown, June 1): “A Black journalist and poet calls for a reconsideration of the way America teaches its history of slavery….For this book, the author traveled to nine sites, eight in the U.S. and one in Dakar, Senegal, ‘to understand how each reckons with its relationship to the history of American slavery.’ The result is a devastating portrait with unforgettable details.…A brilliant, vital work.” (Hear Smith discuss the book on Kirkus’ Fully Booked podcast.)

The Plague Year: America in the Time of Covid by Lawrence Wright (Knopf, June 8): “In his characteristically rigorous and engrossing style, Wright documents innumerable episodes of ineptitude and malfeasance….Maddening and sobering—as comprehensive an account of the first year of the pandemic as we’ve yet seen.”

What White People Can Do Next: From Allyship to Coalition by Emma Dabiri (Perennial/HarperCollins, June 22): “In this follow-up to her excellent debut, Twisted (2020), Dabiri once again pulls no punches, offering a sharp, relevant critique and deconstruction of racial categorizations, particularly the common assumption of White people as the default norm….A must-read for anyone seeking to be an agent of much-needed societal change.”

The Sound of the Sea: Seashells and the Fate of the Oceans by Cynthia Barnett (Norton, July 6): “In this well-researched, consistently illuminating work, the author smoothly combines environmental science and cultural history to trace the origins and decline of mollusks….The author also takes us around the world” in this “absolutely captivating nature book.”

Seek You: A Journey Through American Loneliness by Kristen Radtke (Pantheon, July 6): “Radtke’s second graphic memoir feels almost custom-made for the social-distancing era: She explores our need for connection and touch and the negative social and personal effects of isolation. But the book is a much broader and deeply affecting study of loneliness, uncovering the host of ways our craving for community manifests itself in ways that are sometimes quirky and sometimes terrifying.…Superb.”

Pastoral Song: A Farmer’s Journey by James Rebanks (Custom House/Morrow, August 3): “A beautifully written elegy to traditional farmers and farming methods….Guided by the knowledge passed down by his family and recent advances in sustainable technology, the author continues his journey, slowly salvaging his tiny corner of the world to create a legacy for his children and the future. A lovely cautionary tale filled with pride, hope, and respect for the land and its history.”