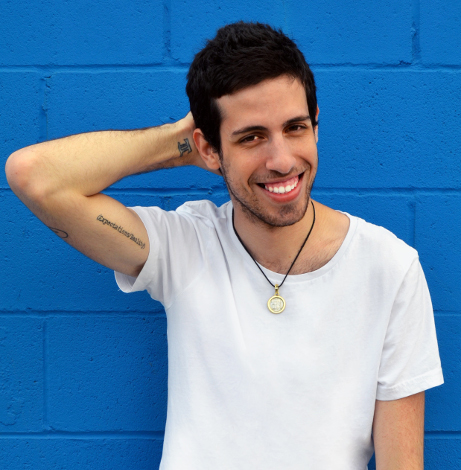 Adam Silvera is easy to talk to. He’s cheerful, flattered, and has a laugh somewhere between ebullient and sheepish. I could have chatted with him for half an hour about our dogs alone, but duty called and we needed to discuss his debut novel of self-deprecation, fruitless attraction, and suicide. “It’s tragic and beautiful and—” Silvera pauses to find the right word for More Happy Than Not’s tale of brutally unrequited love. “Bittersweet is what we can roll with.”

Sixteen-year-old Bronx resident Aaron Soto is fumbling through the wake of his father’s suicide. He’s not without anxiety and depression (a telltale scar on his wrist reminds him of his fragility) but he has a devoted girlfriend endeavoring to distract him. When he begins spending time with Thomas from a neighboring project, Aaron is increasingly attracted to him and feels distanced from his girlfriend. Conflicted by his feelings for Thomas and still reeling from the death of his father, his inner turmoil proves stifling. He opts to pursue a procedure from the Leteo Institute promising to help its patrons forget. Sound familiar? Comparisons to Eternal Sunshine of the Spotless Mind, though not entirely accurate, have been affixed to More Happy since an early pitch.

“I worked at Barnes & Noble from the time I was 19 until maybe 21 and I was pitching More Happy, which was a very different book back then, to a co-worker,” says Silvera. His colleague immediately thought of Eternal Sunshine of the Spotless Mind. “I had no idea what the hell he was talking about,” Silvera confesses. Watching the film helped Silvera determine where he wanted to take his book. “Eternal Sunshine focuses on memory erasure, and while Leteo in the book pitches [their service] as erasing memories, it is in essence altering memories. The memory alteration allows for certain twists that the memory erasure wouldn’t have.”

Michel Gondry’s storytelling aside, we have Silvera’s debt to a private high school to thank for the book. Sort of. It was the need to repay tuition that led Silvera to work at Barnes & Noble. Making up for not having college on his resume, he ran with it, engrossing himself in the world of children’s publishing.

As a bookseller, he was consumed by marketing other writers’ titles with little time for his own writing. So when the opportunity to take a break from New York and live in Texas came, he bit. The escape not only facilitated time to write, it gave him a clearer vision of the microcosm from whence he’d come. “That was the first time I really got out of the city and it allowed me to see the Bronx for what it is,” says Silvera. “I lived in New York my entire life and didn’t even break out of the Bronx until I was 19. Living in Texas allowed me to see everything that was beautiful and different about the Bronx.”

What’s beautiful and different in More Happy is the diversity.  “I definitely thought I was shooting myself in the foot twice writing about a gay Hispanic," says Silvera. It’s indeed a departure from Anglo and heteronormative worlds, but call-outs praising the book’s diverse population still puzzle him.

“My best friend was black,” says Silvera. “My other best friend was Puerto Rican. I’m half Puerto Rican. This was my life. These diversity conversations are sometimes surprising to me. Where is everyone living that this is not their day-to-day? I was very lucky with Soho Teen. I definitely had some push-back with other publishers who tried to make More Happy something that it’s not.”

It would have been easy, Silvera says, to be accommodating and whitewash Aaron. There isn’t a glaring commentary about Aaron's Hispanic heritage but the genuine subtlety of these references make them that much more powerful—he’s not another white kid with problems. Making Aaron straight was also a firm suggestion, which would have foolishly annihilated the book’s inspiration.

“The idea for me was always to explore a character living in both worlds, as both a straight kid and a gay kid,” says Silvera. “I’ve always wanted to explore the whole coming out thing but from a nurture vs. science angle. If you were gay, and you could choose to be straight, would you do it? As a teenager, I would have considered that, but at 24, I’m good.” He jokes that dashing lads like Andrew Garfield keep him happily gay these days. “At 16 in the Bronx, I would have gone the easy way out.”

But is Aaron really taking the easy way out by altering his memories? Spoiler alert: his heartbreaking ending isn’t a neatly tied bow. “I feel guilty for being the pen behind it,” says Silvera. “But I think the powerlessness that comes from that ending speaks more volumes to Aaron’s lesson than it would have in the original drafts.” It may not be a happy ending but it’s a damn good read and it's—well, just refer to the title.

Gordon West is a writer and illustrator living in Brooklyn. He is at work on his own picture book and teen novel.