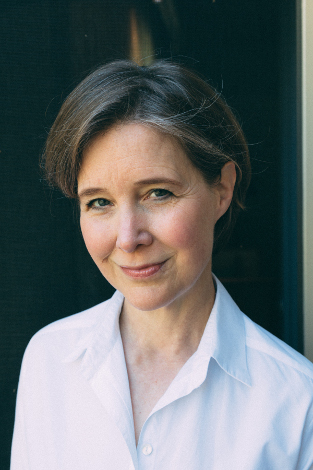 If you’ve read Ann Patchett’s collection of nonfiction essays, This Is the Story of a Happy Marriage, you may find some vague familiarities in her new, masterful seventh novel Commonwealth—divorce and its exponential aftermath, cops and writers, Catholicism, caretaking, commuting between California and the South. Loosely based on her own family lore, Commonwealth is the closest to home Patchett’s globe-trotting fiction has ever come, which is a big departure for the acclaimed bestselling author of Bel Canto and State of Wonder.

“I would like to do all sorts of things that I haven’t done before, and this is something I haven’t done before,” says Patchett. “I always cut myself off from my life when I was writing fiction, but as a writer, it was interesting to make the decision to try to do it the other way and to play through the guilt and responsibility and the entitlement and the right just to make art to tell the story.”

Following the fragile yet epic bonds of blended families, Commonwealth begins at the Los Angeles home of Fix and Beverly Keating and their two young daughters. Many gin and juices and a few years later, Beverly leaves her husband for Albert Cousins, a married father of three. Beverly and Bert move to Virginia to raise her girls, but their happily-ever-after is marked by not-so-sunny summer visits from Bert’s kids—it’s Tolstoy meets The Brady Bunch. As the daughter of divorced parents, Patchett’s innate compassion for her characters cuts through the domestic mess with piercing, matter-of fact revelations:

Here was the most remarkable thing about the Keating children and the Cousins children: they did not hate one another, nor did they possess one shred of tribal loyalty….The six children held in common one overarching principle that cast their potential dislike for one another down to the bottom of the minor leagues: they disliked their parents. They hated them.

The families are further torn apart when Cal, Bert’s oldest son, dies from a bee sting while the kids are goofing around. Not until the children become adults do they reckon with the magnitude of their past. Franny, Beverly and Fix’s younger daughter, is an aspiring writer who falls in love with an older acclaimed  novelist, Leo Posen. She confides to him the tragic events from her childhood, and he turns her heartbreaking story into Commonwealth, a bestselling novel for all to read. The repercussions of real life played out on the page are fascinatingly meta but also ground the domestic drama with an intimately raw moral dilemma: to whom do shared stories really belong?

Patchett jokes that everyone immediately thinks she is Franny, but she sees herself in Leo: “I’m the successful novelist who strip-mines the lives of other

people.” The decision to mine her own family history was not easy; Patchett struggled with the idea for years. “I feel like I have tied myself in knots for my whole writing life to make sure that I wasn’t writing anything that anyone could possibly misconstrue as autobiographical fiction,” she says. “A gal gets to be 50 and would like to write about whatever she wants to write about.” Even with her hard-earned literary liberation, Patchett could not fully shake her most important critics; she got her family’s blessing to write Commonwealth, and they read the manuscript before she published it. “Is it all right with [my family] is a bigger question than is it all right with the New York Times.”

Bridgette Bates is a writer and editor in Los Angeles. Her first book, What Is Not Missing Is Light, won Rescue Press’ Black Box Poetry Prize.