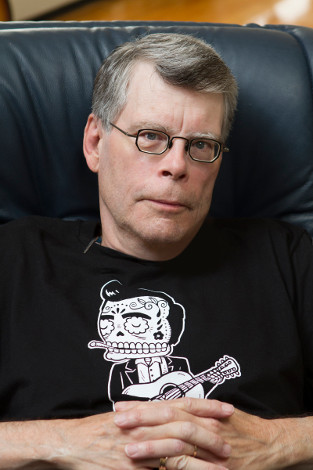 If you are younger than—well, younger than I am, anyway, Stephen King is like the Overlook Hotel: He has always been there.

But, like its eternal caretaker, Jack Torrance, King has a back story. Forty years ago, he wasn’t quite there—that is, he wasn’t yet a giant of popular

fiction and an ascended master of the pants-wettingly–frightening yarn. Instead, he had been laboring away for a while on the lower rungs of a high school faculty, teaching English by day and, like said Mr. Torrance, drinking beer by night. And writing, always writing: He had several novels in his desk drawer by the early 1970s, and though he had yet to convince a publisher of it, he was certain that he had the stuff to take his place alongside Poe, Lovecraft and maybe even Tom Tryon.

As the story goes, King’s wife, Tabitha—who surely deserves a place in the pantheon of champions of American literature—retrieved a few pages, pounded out on a battered Olivetti (if you are younger than, say, Chloë Grace Moretz, that will be a mysterious reference indeed), that a despairing King had discarded. She encouraged him to keep on with the weird tale that he was struggling to pull out of the ether, and King took her up on it.

What had begun as a short story turned into a novel, if a rather formless one, that reportedly took King a fevered couple of weeks to bang out. That novel made the rounds, earning rejection after rejection to befit its heroine, who was an odd bird, or, in Kingly terms, a low bird, if birds had totem poles—and, as King wrote, “The low bird is not picked tenderly out of the dust by its fellows; rather, it is dispatched quickly and without mercy.” (Cue slaughter.) Eventually, when hope was fading against hope, it landed a home at Doubleday and a $2,500 advance—a little more than $13,000 in today’s dollars.

Published in April 1974, Carrie took a few months to sell out its run in hardcover. I was working in a heavily trafficked bookstore in suburban Washington, D.C., at the time, and I remember selling a copy or two a day, far fewer than Peter Benchley’s Jaws, wh

ich had come out a couple of months earlier. It took a few months, too, before major publications such as the New York Times noticed King’s debut, most in brief and then in passing.

Yet Carrie, that oddly blood-soaked tale of a plain Jane with specific, unusual powers to move an audience, did just fine in the end. After the paperback rights were sold, King was able to leave teaching and write full time, which he did with a vengeance, producing big blockbuster novels such as The Shining, Salem’s Lot, and The Stand within a few years and proving that, though there may have been toothy sharks in the water, Benchley’s vision was a lot less scary than his. And after Brian De Palma released his exceedingly creepy movie version in 1976, propelling John Travolta from sweathog to movie star, King was able to afford just about anything he wanted, though it took a while before he moved on from that beat-up Italian typewriter.

He has always been the caretaker—for the last 40 years, anyway. We wish Stephen King many years of happy horror-making to come.

Gregory McNamee is a contributing editor at Kirkus Reviews.