Two YA fan favorites join forces in What If It’s Us? 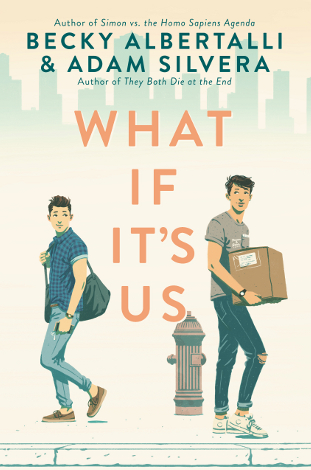 Becky Albertalli and Adam Silvera first connected years ago, just after each had sold what would go on to be celebrated debut novels: Simon vs. the Homosapiens Agenda and More Happy Than Not, respectively. They had the same agents, and exchanges of early drafts progressed to emails and text messages until they stumbled upon an idea for a co-written young adult novel. But then their separate literary careers took off. It was only after each had published three novels—and Albertalli’s debut had been sold to Hollywood as Love, Simon—that they returned to that early idea.

“I never thought this particular story would spark a book, especially a young adult one,” Albertalli begins, holding back laughter, “because it's kind of inappropriate.” At that, Silvera breaks out laughing as well. When she was in her early 20s, Albertalli explains, she posted a missed connection on Craigslist after seeing a guy in a coffee shop. “And I heard back,” she says, “just not from him. I heard back from someone looking for a sex slave.”

“I see that email,” Silvera says, jumping in, “and I'm like, There’s a story there. What if we did a missed connection but between two boys?”

Filled with lovably complicated characters and grin-inducing romance, What If It’s Us is the product of nearly three years’ worth of texting each other ideas and sharing character notes and plot points over the phone. When Arthur and Ben meet by chance at a post office in New York City, where Arthur is spending the summer as an intern, there’s an undeniable connection. But then they go their own ways, without so much as learning the other’s name. Armed with an open heart and rosy disposition, Arthur is undeterred; he forges ahead, determined to find a way to reconnect.

Chapter by chapter, the novel switches off between the teenage boys’ perspectives, with Albertalli and Silvera each writing one of the characters. While Arthur is ready to dive headfirst into his search and subsequent romance, Ben is more reserved, more hesitant.

“So often,” Silvera says, “it's a first love story for both characters involved. But we thought, OK what if one is a little battered from a previous experience and isn't quite sure if he’s ready to lean into love again?”

For those familiar with their writing, it won’t be difficult to figure out which author wrote which character—as Albertalli puts it, people know “Adam’s books are sad and Becky’s books are happy.” Rather than try to meet somewhere in the middle and smooth out the differences between writing styles, each wrote a character true to the stories they like to tell. “We embraced the little mismatch between our styles,” Albertalli says, “and we made that mismatch the story. It’s almost like two completely different kinds of love stories in one.”

Such a characterization proves true up until the very end. Of the few people who have read What If It’s Us to date, Albertalli and Silvera say that opinion is split when it comes to the ending. Some come away thinking of it as typically “Adam,” while others see it as a happy “Becky” conclusion. “I'm hearing things I would never hear from my own books,” Silvera says, “and that’s been so cool.”

The world has changed in some pretty remarkable ways since Albertelli and Silvera first began dreaming up the story they’d write together. Marriage equality became the law of the land, President Barack Obama left office. But the need for young people who are different to see themselves reflected in the books they read is arguably more important today than it was when the two authors first met.

“It's been really difficult creating stories in this time of Trump,” Silvera admits. “But I think we both feel that this is an incredible middle finger to that entire administration. To produce a love story between a gay Puerto Rican and a gay Jewish boy, with such an obvious cover—if this were my last book, I'd be like, OK cool, I went out on a really high note.”

James Feder is a writer based in Tel Aviv. The photo of Becky Albertalli is by Decisive Moments Events and the photo of Adam Silvera is by W.K. Strauss.