Best of 2021: Our Favorite Nonfiction 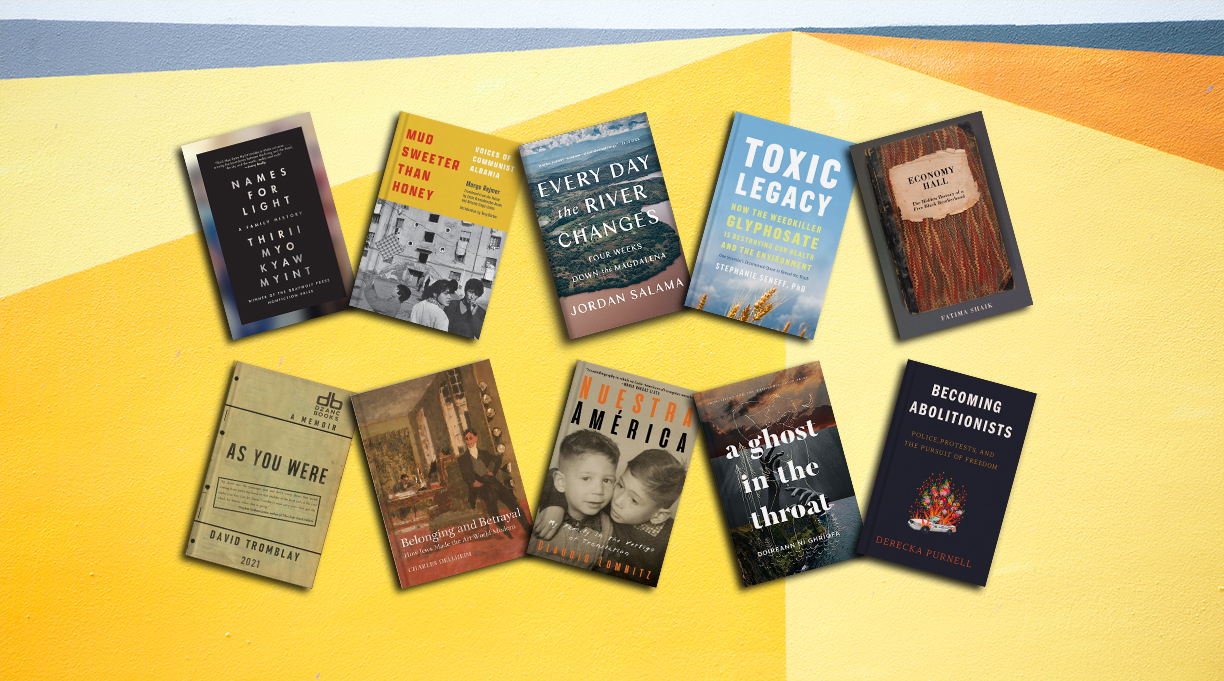 Background by Hector Falcon on Unsplash

The selection of 100 of the best nonfiction books of the year—from hundreds of worthy choices—is both stressful and rewarding. You'll find the complete list here, and I’m especially excited to share 10 books from small publishers that made the top 100 this year, each one a unique and important contribution to literature. Here’s what our reviewers had to say about them.

Belonging and Betrayal: How the Jews Made the Art World Modern by Charles Dellheim (Brandeis Univ. Press, Sept. 21): “A scholar tells the story of 20th-century art dealers, the avant-garde and old masters works they promoted, and Nazi plunder.…A brilliant account of Nazi pillage and the ongoing efforts at restitution.”

Nuestra América: My Family in the Vertigo of Translation by Claudio Lomnitz (Other Press, Feb. 9): “The noted anthropologist and historian takes his rich family history and builds a narrative of universal significance.…A masterpiece of historical and personal investigation, perfect for anyone trying to uncover their family’s past.”

Names for Light: A Family History by Thirii Myo Kyaw Myint (Graywolf, Aug. 17): “A writer born in Myanmar and raised in Thailand and the U.S. traces how her family history has haunted her personal journey.…An imaginative and compelling memoir about what we inherit and what we pass on.”

A Ghost in the Throat by Doireann Ní Ghríofa (Biblioasis, June 1): “A fascinating hybrid work in which the voices of two Irish female poets ring out across centuries.…Lyrical prose passages and moving introspection abound in this unique and beautiful book.”

Becoming Abolitionists: Police, Protests, and the Pursuit of Freedom by Derecka Purnell (Astra House, Oct. 5): “Purnell argues convincingly that police departments and prisons are irredeemably implicated in racist ideologies and the perpetuation of violence despite long-standing efforts at reform.…An informed, provocative, astute consideration of salvific alternatives to contemporary policing and imprisonment.”

Mud Sweeter Than Honey: Voices of Communist Albania by Margo Rejmer (Restless Books, Nov. 2), translated by Zosia Krasodomska-Jones and Antonia Lloyd-Jones: “Based on interviews with Albanians from all walks of life, Rejmer bears shattering witness to the country’s 47 years of communist dictatorship….A gripping book of starkly revealing testimony.”

Every Day the River Changes: Four Weeks Down the Magdalena by Jordan Salama (Catapult, Nov. 16): “In 2018, Salama…determined to travel as much as possible of the 950-mile length of the Magdalena River, from its source in the Andean highlands to the Caribbean coast.…The book is more than a notable achievement in travel literature and more than a clarifying window into a misunderstood culture; it is a book of conscience and open-heartedness. Pair it with Wade Davis’ Magdalena.”

Toxic Legacy: How the Weedkiller Glyphosate Is Destroying Our Health and the Environment by Stephanie Seneff (Chelsea Green, July 1): “A senior research scientist at MIT sounds the alarm on the herbicide glyphosate, the active ingredient in Roundup and other agrochemicals.…Comparisons will be made to Rachel Carson’s Silent Spring—and they should be. We can only hope Seneff’s work goes on to rival Carson’s in reach and impact.

Economy Hall: The Hidden History of a Free Black Brotherhood by Fatima Shaik (The Historic New Orleans Collection, Feb. 25): “The Société d’Economie et d’Assistance Mutuelle, born in 19th-century New Orleans, was dedicated to benevolent causes of tremendous political implication, including the right of education and the franchise. Its members—all men—'rejected racism and colorism,’ a natural outcome of the fact that so many of them were of mixed African and European heritage, the vaunted ‘Creoles’ of the city’s storied past.…A lively, readable story that nicely complicates the view of racial and ethnic relations in the South of old.”

As You Were by David Tromblay (Dzanc, Feb. 15): “In a section that neatly bookends Anthony Swofford’s Jarhead, Tromblay recounts the grim travails of boot camp, with its screaming drill sergeants and vomit-inducing Georgia heat.…An incandescent addition to both Native American letters and the literature of the Iraq and Afghan wars.”