Best Quips from the Best Fiction Writers of 2014 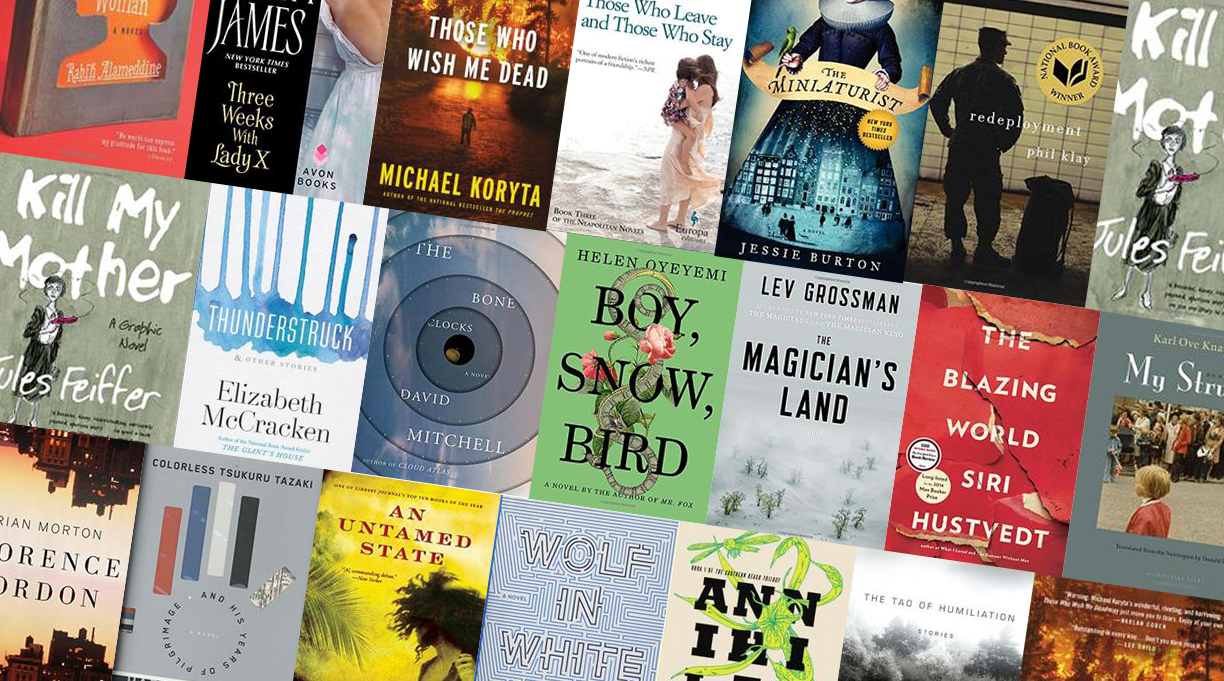 Authors often move us with their written words, and their speech can be just as powerful. Here are some of our favorite quotes from the writers included in our Best Fiction of 2014 lineup that address everything from writing tips to bravery, gender, identity—and the benefit of having a first-reader spouse. – Megan Labrise

“Acting is very much in the moment when you’re performing, and if you get it wrong, the moment’s past, whereas a book is present continually. The first page, third chapter is all still there in your hands.” —The Miniaturist author Jessie Burton in Kirkus Reviews

“The whole notion of ‘write what you know’ is not just boring, but wrong. Lately it seems like every novel has to be a memoir. I’m a boring person, but I’m a writer with a relatively vivid imagination.” —Rabih Alameddine, National Book Award nominee for An Unnecessary Woman, in Guernica

“I started asking myself questions like improvisational comedians do [about the protagonist], like what does he do for a living? What does he wear? Who are his friends?...That performative element is how I wrote the book....” —John Darnielle, National Book Award nominee for Wolf in White Van, on NPR

“The middle child always tries to make peace in the family where there is none, and always fails, and that’s what my work is about.” —Kill My Mother author and illustrator Jules Feiffer in Kirkus Reviews

“Let me first say that I met my Italian knight husband on a blind date at Yale, and he did not want to meet me. He was only interested in a fling, and I had just come off a 10-year relationship.” —Romance novelist Eloisa James, author of Three Weeks With Lady X, in Kirkus Reviews

“Without reserve, I can say that my entire identity is in the books I write.” —famously private Italian author Elena Ferrante (Those Who Leave and Those Who Stay), by email, in Entertainment Weekly

"I think that there are certain experiences that change you, which is different for every person who experiences trauma, but there is no closure. We like to believe the characters in these kind of narratives find peace...but what if you don’t?” —An Untamed State author Roxane Gay in Kirkus Reviews

“Some characters take a long time to come into focus and some sort of knock on your door and come in.” —Brian Morton, Kirkus Prize nominee for Florence Gordon, in Kirkus Reviews

“ ‘It will make you a man.’ ‘It’ll destroy you.’ ‘It’ll make you an animal.’ ‘It’ll turn you into a monster.’ ‘It will make you sadder but wiser for the rest of your days.’ ‘You’ve touched the heart of darkness.’ In fact, it’s a complicated mix of an incredible range of experiences.” —Phil Klay, U.S. Marine Corps veteran and National Book Award nominee for Redeployment, in Kirkus Reviews

“Writing as a woman is always to some degree writing from the side of the culture, not the very heart of it.” — Siri Hustvedt, Kirkus Prize, Man Booker Prize and National Book Award nominee for The Blazing World, in Kirkus Reviews

“All the people I know who write or make films, there’s something wrong with them. Disorder is a good word. If you don’t have that, you don’t do it. It’s as simple as that.” —My Struggle: Book Three author Karl Ove Knausgaard in the  Los Angeles Review of Books

“Anything that makes the world feel ‘off’ to a character is a way of raising the stakes.” —Those Who Wish Me Dead author Michael Koryta in Kirkus Reviews

“A book that’s solely [metaphysical] can be didactic, but a book without ideas is like a diet without vitamin C. I like a book that has motion and people I care about.” —David Mitchell, Man Booker Prize nominee for The Bone Clocks, in  Kirkus Reviews

“If I’m a dark and twisty person—and actually, I don’t think I am—it’s that I’m much more likely to put my dark fears into work than conversation. I’m essentially writing my nightmares, which don’t take up much waking life.” —Elizabeth McCracken, Kirkus Prize and National Book Award nominee for Thunderstruck Other Stories, in Kirkus Reviews

"You have to be strong to descend into the darkness of your mind." —Colorless Tsukuru Tazaki and His Years of Pilgrimage author Haruki Murakami in The Guardian

“I sometimes get asked: ‘How come the men in your stories don't have such strong characters?’ And I'm like: ‘I don't care.’ ” —Boy, Snow, Bird author Helen Oyeyemi in The Observer

“Even when there’s sadness engrained in my stories and in the characters’ revelations I want the plot to suggest an enlargement of life, a means of defeating despair.” —The Tao of Humiliation author Lee Upton in Late Night Library

“[W]hen I finished it, I handed it to my wife, and I said, ‘I think I just wrote something incomprehensible about four women wandering aimlessly on a hiking trail in North Florida. Could you please check for me?’ She read it and thankfully gave it the stamp of approval and said it was actually a novel and actually made sense.” —Annihilation author Jeff VanderMeer in Clarkesworld Magazine

Photos above, from top, are of Eloisa James, Phil Klay and Elizabeth McCracken.