Best Quips from the Best Nonfiction Writers of 2014: 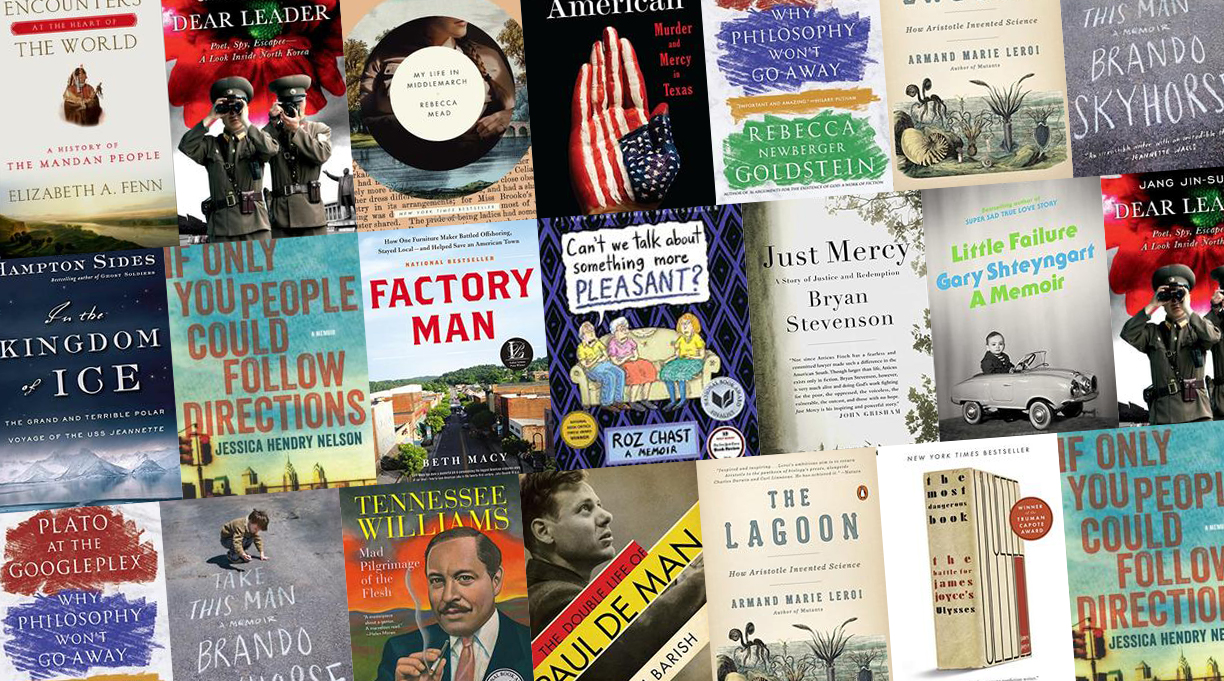 The best nonfiction informs, surprises, inspires. Our Best Nonfiction Books of 2014 list includes meditations on poverty and injustice, philosophy and science, histories and mysteries, personal and private lives. Here are a few of our favorite things spoken by authors who helped us see what is in a fresh way. —Megan Labrise

"The people that love de Man and continue to support him fundamentally say that there is no necessary connection between what a person does or says in his or her private life and what his or her ideas are. I'm not of that position." —Evelyn Barish, author of The Double Life of Paul de Man, in The Chronicle of Higher Education

“The sad thing is that, because the publication of a book is a precarious business to begin with, it’s not too difficult to get books withdrawn.” —Kevin Birmingham, author of The Most Dangerous Book: The Battle for James Joyce’s Ulysses, in Kirkus Reviews

“I didn’t know anything about elder lawyers, I didn’t know about hospice. I didn’t know whether they had a will. I didn’t know how to start these conversations. I felt like I was just making it up in a sort of incompetent way as I went along. As I said to somebody recently, it’s not like they have What to Expect When Your Parents Are Over 90 and Don’t Want to Move Out of Their Apartment.” —Roz Chast, author of Can’t We Talk About Something More Pleasant?, winner of the 2014 Kirkus Prize for Nonfiction, in Kirkus Reviews

“[T]here is something disturbing—dare I say racist?—about beginning in 1492. It implies that native peoples do not matter—that they don’t count.” —Elizabeth Fenn, author of Encounters at the Heart of the World: A History of the Mandan People, in Erstwhile

“In most societies, it is the poor who, despite not having resources, at least have community. And in a way people understand in the poorer parts of the world that, if you are poor, solitude is an extravagance. And too many Americans who are poor pay the unfortunate tax of also being alone.” —Anand Giridharadas, author of The True American: Murder and Mercy in Texas, on NPR

“2,400 years ago I was skeptical of the newfangled technology of writing. Now I’m tweeting. #olddognewtricks.” — Rebecca Newberger Goldstein, author of Plato at the Googleplex: Why Philosophy Won’t Go Away, as Plato (@platobooktour) on Twitter

“If anyone thinks North Korea is opening up, they are completely mistaken.” — Jang Jin-sung, author of Dear Leader: Poet, Spy, Escapee—a Look Inside North Korea, in the Guardian

“When I approach a potential subject, I tell them that it works on the same principles as good tailoring—the more sittings, the better the fit.” — biographer John Lahr, author of Tennessee Williams: Mad Pilgrimage of the Flesh, in Kirkus Reviews

“Plato says that more perfect realm beyond the senses, the realm of ‘ideas,’ of pure form, that is the thing that we should be discovering, that we should be studying, and he devoted a lot of time to thinking about mathematical forms and how this invisible world was structured. Aristotle says, ‘No. This concept of the forms beyond the senses, it annihilates the study of nature. What we should be doing is studying the things directly in front of us.’ ” —Armand Marie Leroi, author of Kirkus Prize finalist The Lagoon: How Aristotle Invented Science, on WBUR, Boston’s NPR news station

“When I heard he said things like, ‘The [expletive] Chi-Comms aren’t gonna tell me how to make furniture!’ my story Spidey sense went on high alert.” —Beth Macy, author of Factory Man: How One Furniture Maker Battled Offshoring, Stayed Local—and Helped Save an American Town, on subject John Bassett III, in Omnivoracious

“I don’t really know who I’d be if I’d chosen David Copperfield.” —Rebecca Mead, author of My Life in Middlemarch, in Kirkus Reviews

“The rhythms are familiar by now. I've found my sea legs and I'm steering a giant ship to shore, but like, whilst naked and drunk and screaming all at the same time. Somebody pulls out some expensive, stinky cheeses and I'm shoving my face. A bird named Jack plays show tunes on a ukulele. It's wild. It also might be a mixed metaphor.” —Jessica Hendry Nelson, author of If Only You People Could Follow Directions, on having completed two-thirds of an essay, in Philadelphia City Paper

“When you’re an immigrant, failure and success are such huge words.” —Gary Shteyngart, author of Little Failure: A Memoir, in Kirkus Reviews

“You know, it was a hell, but hell can be quite comfortable sometimes. And more specifically, it was my hell. So I'm actually pretty darn proud of that hell. And if anything, I would love for people reading this book, who are perhaps going through their own versions of hell, to understand that there's always a way out of hell.” —Brando Skyhorse, author of Take This Man: A Memoir, on KPCC, Southern California Public Radio

“I think I kind of have a case of historical ADD.” —Hampton Sides, author of In the Kingdom of Ice: The Grand and Terrible Polar Voyage of the USS Jeannette, whose previous topics include World War II, Martin Luther King, Jr. and Americana, on Book TV

“We have a criminal-justice system that treats you better if you’re rich and guilty than if you’re poor and innocent. I don’t believe that America’s system is shaped by culpability. I think it’s shaped by wealth.” —Bryan Stevenson, author of Kirkus Prize finalist Just Mercy: A Story of Justice and Redemption, in Time magazine