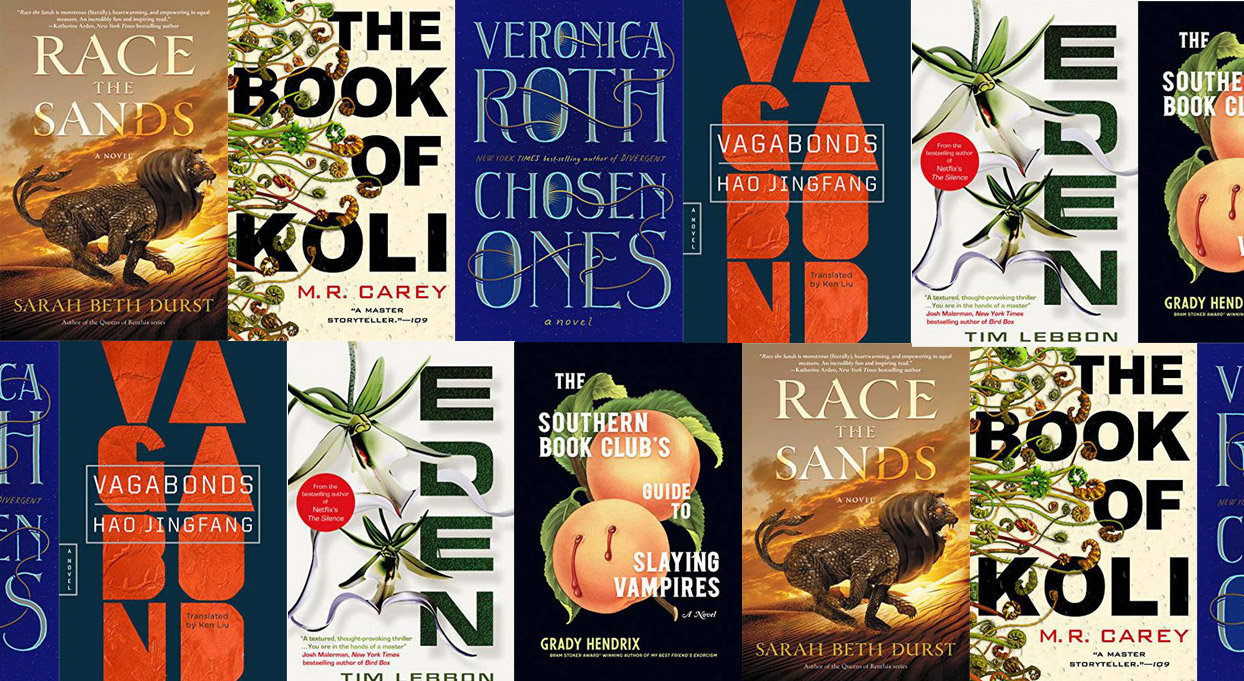 Speculative fiction—that is, science fiction, fantasy, and horror—is your ticket to the best entertainment you’ll find this month. Check out these fantastic reads and join the ride.

WHAT IT’S ABOUT: Patricia Campbell, a southern housewife, wants more out of life than picking up after her workaholic husband, trying to engage her teenage kids, and taking care of her senile mother-in-law. She finds a little excitement in a true crime book club, but things really pick up when she meets her elderly neighbor’s nephew, James Harris. James is a well-travelled, well-read night owl whose mysteriousness captures Patricia attention. When children on the other side of town go missing, armchair sleuth Patricia begins to suspect James. What she doesn’t realize is what readers already know from the book’s title: James travels by night for a reason.

WHY YOU MIGHT LIKE IT: Hendrix’s well-crafted brand of horror is a rare composite of chills, nostalgia, originality, and accessibility.

WHAT IT’S ABOUT: In Earth’s ecologically ravaged future, the worst fears have become reality: Ocean levels are rising, rainforests have been destroyed, and animal species are near extinction. To fight against eco-collapse, mankind has set up The Virgin Zones, vast areas of land forbidden to humans and given back to nature. That doesn’t stop a team of adventure-seekers like Dylan from going to Eden, one of the largest zones. Dylan brings along his daughter who secretly knows that her mother, who abandoned both of them years ago, is also there. What awaits them is not a cozy family reunion at the end of an illegal race, but a harsh wake-up call that has them rethinking humanity’s position in the food chain.

WHY YOU MIGHT LIKE IT: Eden turns the adventure ride of Jurassic Park into a fast-moving eco-thriller.

WHAT IT’S ABOUT: Ten years after a group of ordinary teenagers, the Chosen Ones, were trained by the government to fulfill a prophecy of killing an all-powerful entity called the Dark One who was decimating entire cities, things are far from normal. While the world has largely moved on, the five heroes—still the world’s most popular celebrities—are having a rough time. One of them, Sloane, suffers from PTSD, and is harboring secrets. When one of the Chosen Ones dies and the others gather for the funeral, they discover that the Dark One’s ultimate goal was perhaps more sinister than they or the government could ever have imagined.

WHY YOU MIGHT LIKE IT: YA author Roth’s first adult novel looks behind the usual superhero tropes and examines the psychological impacts of fading fame and having served one’s purpose.

WHAT IT’S ABOUT: It’s humankind vs. genetically engineered plants in earth’s far future, or at least that’s what the Ramparts want you think. They’re the ruling family of the small, walled village of Mythen Rood in what was once England. The Ramparts control ancient, solar powered tech to combat the ever-encroaching choker trees and their deadly seeds. When young Koli finds an artificial intelligence, he tries to use it to join the elite Ramparts and find his place in this stratified society. They’re not having it.

WHAT IT’S ABOUT: A century after humans on Mars have fought for and won their independence, the Earth-Mars relationship is no less tense. To ease that tension, a delegation of 5 young people is sent to Earth as ambassadors of goodwill. However, Earth’s materialistic culture has since naturally diverged from the more utopian, technologically advanced Martian society. Thus, when the delegates return home, they find themselves metaphorically caught between worlds, unable to reconcile the way they were brought up with their wider view of the universe.

WHY YOU MIGHT LIKE IT: It’s a powerful depiction of why you can never go home again.

WHAT IT’S ABOUT: In Becar, who you are in this life determines your next life. Good people are reincarnated as humans; bad ones come back as animals; and evil ones come back as mindless lion-like monsters called kehoks.  Kehoks are doomed to remain that way for all eternity unless they can win the races. Former kehok rider Tamra is now a trainer, looking to win the gold to reclaim her daughter. Raia is desperate enough to escape her overbearing family and fiancée to join the races herself. They team up to help each other, not realizing that their unique kehok is not the stupid brute it appears to be.

WHY YOU MIGHT LIKE IT: This epic standalone fantasy’s elevator pitch description says it best: “National Velvet with monsters and a big helping of palace intrigue.”

WHAT IT’S ABOUT: In 1905 New York, Thalia Cutler is an accomplished stage magician. She may not compare to the people who know true magic, but she is nevertheless adept. When one of Thalia’s tricks goes horribly wrong, she learns that she is indeed one of the magical beings that walk the streets of this romantic Gilded Age. Even with her latent talent, Thalia’s ability to shapeshift allows her to rub elbows with New York’s rich and powerful. But she will first have to tame her uncontrolled power and contend with real monsters who would consume her newfound magic.

WHY YOU MIGHT LIKE IT: Come for the magical flavor, stay for the clever world building and realistic characters.

The Postutopian Adventures of Darger and Surplus by Michael Swanwick (Subterranean)

Are you playing the mid-series waiting game? Your wait may be over. Here are this month’s SF/F sequels:

A Time of Courage (Of Blood Bone) by John Gwynne (Orbit)

The Time Seer (The Endarian Prophecy) by Richard Phillips (47North)

The Mistress of Illusions (The Dreamscape Trilogy) by Michael D. Resnick (DAW)

The Last Emperox (The Interdependency) by John Scalzi (Tor Books)