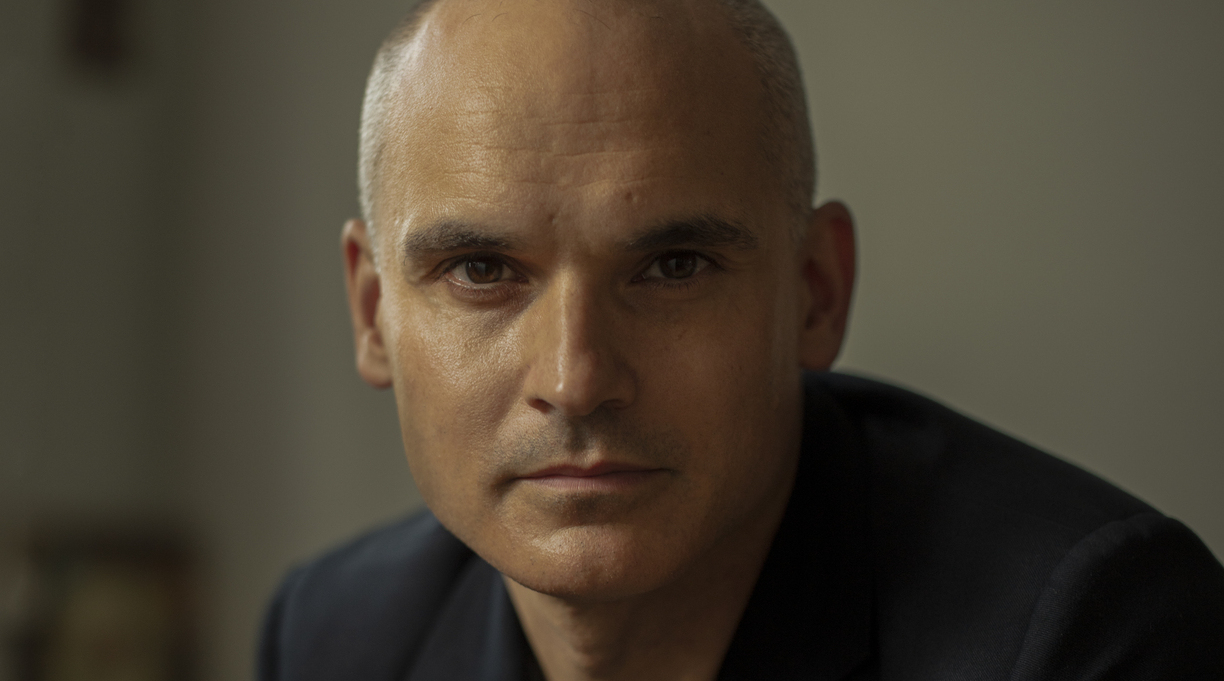 When Hernan Diaz meets with me over Zoom in mid-April, he is camped in a friend’s London flat, having tested positive for Covid after arriving in the U.K. for the London Book Fair. “I had all these things lined up for Trust,” says the Brooklyn-based author, referring to his second novel, out May 3 from Riverhead in the U.S. “I was going to meet booksellers and press. Instead I’ve just been sequestered, first in a hotel room, and then at a good friend’s vacant apartment.”

The good news is that Diaz has just tested negative and will fly back to the States in time for a 11-city tour with a series of live events as well as an online talk with Roxane Gay for her book club on June 23. It’s a big drumroll of publicity for the novelist, whose first book, In the Distance, was published in 2017 by indie Coffee House Press and went on to become a finalist for the Pulitzer Prize and the PEN/Faulkner Award.

Trust is a fascinating puzzle box, composed of four separate sections that all circle around mysterious fictional New York financier Andrew Bevel, whose dealings may have played a significant role in the stock market crash of 1929. To make things even more meta, the book opens with a novella, Bonds, in which fictional writer Harold Vanner fictionalizes Bevel’s story in an Edith Wharton–like tale. Other sections of the book complicate the very public narrative of Bonds. In its starred review, Kirkus calls the book “a clever and affecting high-concept novel of high finance.”

I spoke with Diaz—who was born in Buenos Aires, grew up partly in Sweden, and moved to New York to attend New York University—about the inspirations and ideas behind this heady novel. Our conversation has been edited for length and clarity.

I seem compelled to open every interview nowadays with this question, so forgive me: Was this a pandemic novel?

That’s a legitimate question. As you can imagine, this was a much longer project than the last couple of years; I would say a third of it was a Covid novel. I live in a small Brooklyn apartment, so [Covid] really affected my way of working. I started getting up at 4 a.m. to get the quiet hours. I found solace in the writing of the book, just shutting out reality. And then I was lucky enough to get a Cullman Center Fellowship at the New York Public Library at the peak of Covid. I went there, walking from Brooklyn to the library [in midtown Manhattan], every day. Some days I was [at the center] all on my own, which was also a magical, weird, apocalyptic experience that made its way onto the pages.

And you were in that grand beaux-arts library building on Fifth Avenue that so perfectly evokes the period you’re writing about.

It’s a monument to capital, with all the philanthropists who funded the building and the private collections that were donated. The history of capital and how it has inscribed itself on the public body of the city of New York were very present to me during the writing of the book.

The structure of the novel is quite original. The first section is a novel that feels as if it could have been written by Wharton.

I have a very intense relationship with Henry James and Edith Wharton; it’s literature that speaks to me in a very intense way and has determined me as a reader and as a writer. So it was joyful to be able to inhabit that voice a little bit for a while, because it’s something that is actually impossible to do. It’s like being a musician and writing, like…Brahms. It just can’t be done. But here was a good excuse to allow myself to try this. That novel within the novel contains the whole book, although in a disfigured, distorted, warped way. To write that novel first was a good way to learn what the book was about.

And then come these other related but free-standing sections: The tycoon’s own memoir, an account by his ghostwriter, and the diary of his wife. How did you settle on this approach?

I knew very early on that I wanted to write about wealth. Not just class—which American literature has done very well—but the labyrinth of capital and how it works. I was interested in how extreme wealth distorts the reality around itself, which is something we were seeing very much during the Trump years.

The structure felt necessary for two reasons. No. 1, the nature of wealth is being highly mediated, because the labor of multitudes goes into it. I didn’t want the book to be narrated from one single perspective. The second reason is that reality itself had been commodified during those years, and that was something that I found frightening and fascinating in equal measure. So the book is to a large extent about that distinction between fact and fiction, between historical record and fabrication and the line that separates these realms.

You mention James and Wharton. Were there other books or authors who influenced the writing of Trust?

Upton Sinclair’s The Moneychangers, which is a book from 1909 that is totally out of print. I bought, for $4.50, a first edition on ABE books, because nobody cares. And the other is the Trilogy of Desire by Theodore Dreiser, of which only the first volume, The Financier, is in print with Penguin Classics. They are the only books, to my mind, that were focused on the machine of capital in a way that is otherwise lacking in the American canon. I can’t say that I liked them as literature, but I learned from them. And then I read the autobiographies of “great men” from the time—Andrew Carnegie, Henry Ford.

Aside from the inner workings of the financial world, what did you learn from this reading?

If you read these narratives of accumulation and these epics of capital, there simply are no women in them in any regard—not in the fiction and certainly not in the historical documents. It’s a womanless world, and that is one of the conventions, one of the assumptions that I wanted to subvert. And one of the erasures that I wanted to rectify, because it’s a highly ideological erasure. It’s not an innocent omission.

The book ends with the secret diary of Mildred Bevel, the financier’s wife, which rather thrillingly illuminates what has come before. Was that section enjoyable to write?

I feel very exposed in that section of the book; I have a hard time revisiting it, just for reasons of my own. I feel that Mildred and I share a lot of interests in terms of literature and philosophy and music. It was very important to me not to victimize Mildred at the end. Mildred does do this horrible thing; there is definitely blood on her hands. And that, to me, added to her dignity as a character. Part of her agency comes from this power to inflict harm and from her own greed, which she’s totally entitled to, I feel. But she's not only that—she’s also this wonderful person in addition. I think we also get to see in the end that Bevel, although he’s this vainglorious shell of a person, also feels enormous love for his wife, and that is redeeming to some extent.

Correction: An earlier version of this story misstated the publisher of In the Distance.